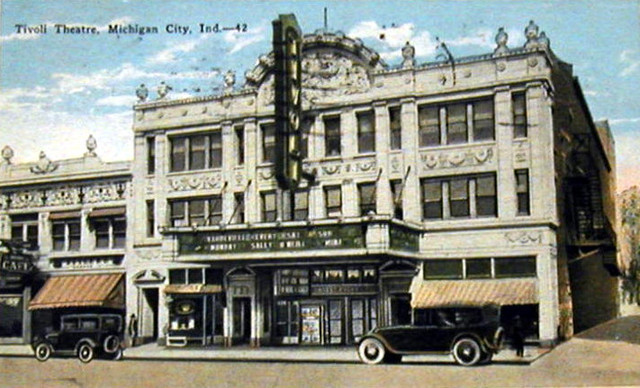 The Tivoli Theatre was built in 1922 on the site of the the Grand Opera House (later known as the Orpheum Theatre, and finally, the Garden Theatre, when it became a vaudeville and silent film house) which had been destroyed in a fire in 1921. It was opened as the primary suburban anchor by Paramount-Publix.

The almost 1,300-seat Tivoli Theatre was designed in Neo-Classical style, its facade covered in white terra-cotta. It cost over $300,000 to build.

The Tivoli Theatre, which featured a full performance stage, orchestra pit, and balcony, originally hosted vaudeville, as its predecessor did, as well as stage shows, in addition to motion pictures. During the 1930’s, it was acquired by the Balaban & Katz chain.

Much later, the theater had its brief moment in the spotlight when it served as the venue for the Miss Indiana Pageant from 1957 until 1961.

In its later years, it was operated by the Kerasotes Theaters chain, screening movies until it closed in late-1972 and was razed the following February to make way for a new bank.

The Tivoli wasn’t demolished, as such. To the north of the theatre (on the left in the picture) was what was known as the “Tivoli Annex” (a small storefront and office building), and then on the corner, Citizens Bank. The bank occupied the Annex, for additional office space. In the very early 70’s the bank was remodeling the Annex building, and the workers accidentally set it on fire. The fire, as I recall, burned down both the annex and the attached theatre building. After the site was cleared, the bank then built it’s new headquarters on the site.

Corrections: The Citizens Bank annex fire was on March 8, 1972. The Tivoli continued screening movies until November 30, 1972. Six people were in attendance that night as the Tivoli presented its curtain-closer; a cheap British horror flick called “The Rats Are Coming! The Werewolves Are Here!” The Tivoli was demolished in February and March of 1973 to make way for a bank building which most closely resembles a Big Mac container, with about the same charm. Coincidentally, a fire broke out at the demolition site when a workman’s torch ignited a pile of rubble. The date was March 8, 1973- the first anniversary of the bank fire.

A timeline of Michigan City history here says that the Tivoli Theatre opened in 1922. The Grand Opera House had burned in 1921. Plans for the rebuilding were announced in the May 21, 1921, issue of The American Contractor:

A 1923 photo of the Tivoli can be seen at the top of this page of a promotional booklet published by the Federal Cement Tile Co. in the late 1920s.

It’s too bad this theatre is gone. It looks like it was a nice one. Oh well, that’s the way it goes.

According to “The Encyclopedia of the American Theatre Organ” by Mr. David Junchen, pg. 629, the “Tivoli Th.” in Michigan City, Indiana, originally had a two-manual, 9-rank Smith theatre pipe organ installed at some point. The book does not have any additional info, such as install date, or blower info, but it DOES say, with some finality, that the organ’s nameplate was “Smith”.

From my meager research, relatively few Smith theatre organs under Mr. Smith’s own ownership/leadership of the company were built, first a handful in his first factory in North Tonawanda, New York, and then a few more (probably two dozen or so) in the factory in Chicago between 1921 and 1924, when the company relocated to Geneva, Illinois.

Only a few Smith organs were built in Geneva (“Geneva-Smith”) in 1924-1925, before Mr. Smith left for California in 1925 and the Geneva Organ Co. was reorganized as its own separate entity (and the designs of their organs changed from Smith in some ways).

Mr. Smith’s own last firm in Alameda, California (with most instruments sold by the Leathurby store in San Francisco as “Leathurby-Smith” organs) also only apparently built about two dozen or so organs.

By far, the majority of Smith organs built (probably over 100 of them) were built in the Seeburg factory in Chicago under the Seeburg-Smith partnership between 1917 and 1920, and usually bore the “Seeburg-Smith” nameplate, although a few of them bore the nameplates of prominent dealers, such as Kramer.

Thus, given that this theatre was built in 1922, the organ must have been a Chicago “Smith” organ, built around 1922-1924 and installed around that time (likely, but not necessarily, installed before the theatre’s grand opening).

Does anybody know where this organ, and/or its parts, is/are today? 9 ranks was on the large side for a Smith organ. Thanks!

We have an address discrepancy. Our page for the Garden Theatre gives its address as 512 Franklin, not 515. I believe that 512 the correct address for both theaters. As Randon noted in an earlier comment, the Tivoli was replaced by the new Citizens Bank building, south of the bank’s original building at the corner of 5th Street, and a web page with a brief history of the bank gives its historic address as 502 Franklin.

The new building (which does indeed bear a resemblance to an elongated McDonald’s hamburger box) is no longer a retail bank, but appears to be used for offices. I’ve set the street view to the proper location, adjacent to the alley at the south end of the modern building.

1964 photo added, new car display and sidewalk sale on Franklin Street and in front of the Tivoli Theatre. Photo courtesy of Christopher Nagel‎.