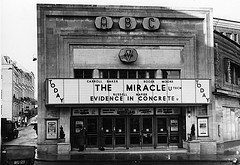 The Savoy Cinema was built for and operated by the Associated British Cinemas(ABC) chain. It was located opposite the Plaza Cinema (former Hippodrome Theatre) and close by the Theatre Royal, on London Inn Square at the corner of New North Road and Northern Hay Place.

It opened on 23rd November 1936. Designed by ABC’s in-house architect William R. Glen, seating was provided for 1,224 in the stalls and 734 in the circle. The proscenium was 42 feet wide. The Savoy Cinema was equipped with a Compton 3Manual/6Ranks organ, and had a restaurant for the convenience of its patrons.

In November 1960, it was re-named ABC. By 1972, the ABC chain was being operated by EMI, and the ABC was closed on 30th September 1972, for conversion into a triple. The circle was extended forward to the proscenium and rear stage wall, creating a 528-seat auditorium. A second auditorium seating 170 was created on the former upper stage area. The original stalls area and stage was converted into a Star Bingo Club, operated by the Star Cinemas chain.

In 1986, it was taken over by the Cannon Group, and re-named Cannon. This was short lived, as the cinemas closed on 4th June 1987 with Tom Cruise in “Top Gun” as one of the final films. It was demolished on August Bank Holiday Monday 1987. Shops and offices were built on the site.

Vintage photographs of the ABC Exeter:
February 1961:
View link
In July 1972, prior to conversion to tripling:
View link
As a twin cinema and bingo club in October 1973:
View link
The new 528-seat auditorium in the former circle, in 1973:
View link