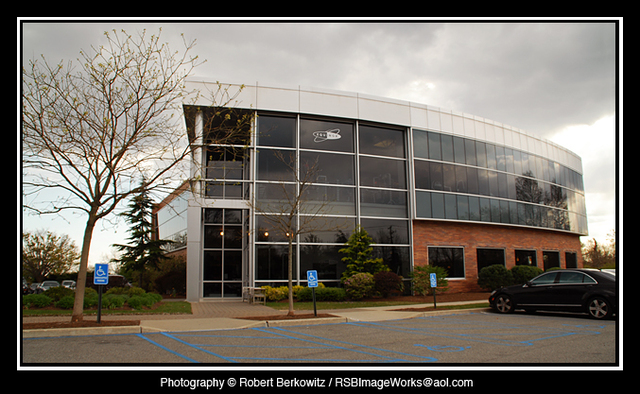 Located in Woodbury, to the south of Syosset. This was one of a handful of "Cinema 150" movie theaters across the country, designed as an "all-purpose" luxury theater that could exhibit films in the following formats: D-150, Todd-AO, 70mm, Panavision, CinemaScope and 35mm. The US Cinema 1950 opened on March 26, 1970 with Barbra Streisand in “Hello Dolly”.

Streamlined in a very late-1950’s, early-1960’s post-modern style that placed a premium on functionality, the Cinema 150’s vast auditorium featured a large, detached balcony, oversized rocking-chair seats, a huge curved screen with a 120' arc, and a phenomenal sound system. The theater could hold well over 1,000 (probably 1,200 or 1,400).

In contrast to the "golf ball" style of the now-restored Cinerama in California, this theater favored a simple, understated red brick and concrete exterior that blended in with the suburban surroundings.

Right up through its last days of operation, the theater remained immaculately maintained and well attended for blockbuster movies. Unfortunately, however, the geniuses at the United Artists chain decided to build a 12 screen stadium theater a mere one mile away in 2000. Not only did UA demolish the last remaining drive-in on Long Island, the Westbury Drive-In, to make room for the new multiplex, but it ultimately led to their decision to shut down the Cinema 150.

Although it was always a popular place to see a film, few people seemed to know of the theater’s unique design and technological amenities, and thus it was gutted to make way for an Equinix Gymnasium without a peep.

Of all of the movie theaters on Long Island, this is the one I miss the most. In 1999, my senior year of high school, I was a part of a large group of die-hard “Wars-ies” who camped out for “The Phantom Menace” tickets. I waited in line for 17 hours. The experience was MUCH better than the movie.

The balcony was an added bonus. I saw a bunch of movies here through the years – “Back to the Future Part III,” “Batman Returns,” “Batman Forever,” the Star Wars Special Editions, “Air Force One,” “Contact” —– many others. The last movie I was able to see before this place closed for good was “Mission Impossible 2.”

One of my all time favorite theatres , with the York theatre in Huntington … The best of the best movies played here lots in 70 mm!

There was only one UA 150, that is the one on Jericho Turnpike. The gym is there now. Another one was announced for the Gardiner Manor Shopping Center on Sunrise Highway in Bay Shore but that was never constructed.

It’s been documented that “Hello, Dolly!” was the first movie to play at the UA Cinema 150. What was the second movie to play there?

I invite all that have worked at The Syosset Cinema 150 to join our group ‘Staff of The Syosset CINEMA 150" on FACEBOOK, it should be a hoot. We can share stories, photos, comments and get together once a year to eat, drink be merry and talk THEATRE.

This theatre is actually located in Woodbury, just slightly east of Seaford Oyster Bay Expressway. By the way the building of the Westbury multiplex had nothing to do in the closing of the Cinema 150. (In 1976-7 when I worked the Syosset, we referred to the theatre as the D-150) The landlord didn’t renew the lease of the Cinema D-150 leading to its' closing. Two one time superior buildings destroyed in the greed of the almighty dollar. Olympus cameras and other businesses were also lost in the lease turmoil. But, I got the enjoyment of working at both of theatres and being a loyal patron of the D-150 until it closed.

The first time I saw Gone With the Wind was here in the late 70s/early 80s, with a wretched 70mm print that cropped the image at the top and bottom and seemed to be terrbily out of focus, even after changing my seat several times and complaining to the manager (who stated that was because of the curved screen!)

I couldn’t believe that this was the number one box office attraction of all time. I was really disappointed, until I saw it again years later in the proper ratio and clarity. Of course it’s magnificent.

When I was in my teens I was in a boys home called Melville house. One of the counselors had been an extra in the movie “The Way We Were”.We made a special trip to the Syosset theater to see it. He played a college student,he said Robert Redford on his breaks would throw the football around with the cast and crew.The movie was good, and they played the Barbara Streisand theme song a lot on the radio.

FYI: there was a twin to this theater same name in Santa Clara California curved widescreen rockers and all. No balcony though. Lines for blocks usually. AMC opened a 20 screen (Mercado) a couple of miles away near Great America amusement park (also now Levi’s Stadium home of the 49ers) and that put an end to that Cinema 150. I loved that movie theater! Sight lines were outstanding.

Does anyone know the closing date of the Cinema 150’s roadshow run of “Song of Norway” (or know which booking followed it)?