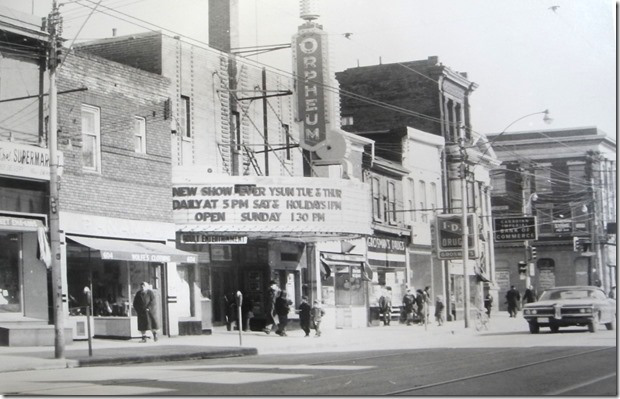 This very old classic theatre was opened as the Orpheum Theatre in 1930. It was closed in 1977

In 1980 it reopened as the Rosemary Theatre. It later became the Golden Dragon Theatre screening Asian movies, which closed in 1987. It was later turned into a jewelry store. In its heyday, the theater used to play midnight to dawn movies.

This theatre would run Westerns all day for next to nothing. John Wayne, Horror, you name it. It was the place to be in early 60’s.

2011 mac fab? walk in, stand still, close your eyes, listen closely, breath deeply, and oh your sure to hear the voices of children laughing, smell the candy and popcorn? its 1956,saturday afternoon orpheum theatre. ghosts? maybe. I was there in 56 and 2011. not thinking – just remembering .

The Orpheum can be seen at the left in this photo.

The undated photo of the Orpheum on this web pageprobably dates from around 1970. The history below the photo says that the house opened in 1930 in a building that had formerly housed an arcade. The house closed as the Orpheum in 1977. In 1980 it reopened as the Rosemary Theatre, and after another closure became an Asian movie theater called the Golden Dragon. It closed for the last time in 1987.

I’m not sure what to make of an item in the July 6, 1918, issue of The Moving Picture World that said that the new Orpheum Theatre at 604 Queen Street West in Toronto had opened the week of June 10. This might have been an earlier theater next door, or it’s possible that the Orpheum actually opened earlier than the author of the history thought, and the building was renumbered at some point.