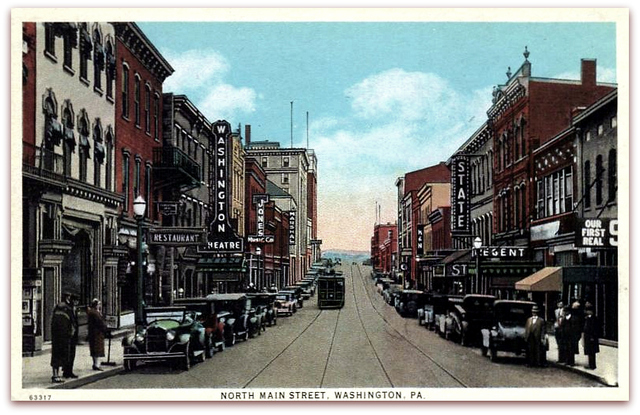 The Globe Theatre was opened by 1914. By 1930 it had been renamed Washington Theatre when a RCA sound system had been installed. By the early-1940’s it was operated by Warner Bros. Circuit Management Corp. In March 1961 it was renamed Penn Theatre and closed on April 24, 1973 with Charlton Heston in “Soylent Green”. It has since been demolished for a parking lot.

From the 1920s in Washington PA. a view of North Main st. along with the Washington and State Theatres.

Replaced by a parking lot, alas.

It appears that the Washington Theater lasted until at least late April or early May 1959, as Walt Disney’s “The Shaggy Dog” moved over from the State to the Washington the final weekend of May 1-2, 1959.

Recent comments on the State Theatre page indicate that it was the Washington Theatre, not the State, that was renovated and renamed the Penn Theatre. The Washington reopened as the Penn in March, 1961, and closed in April, 1973. It was demolished shortly after closing.