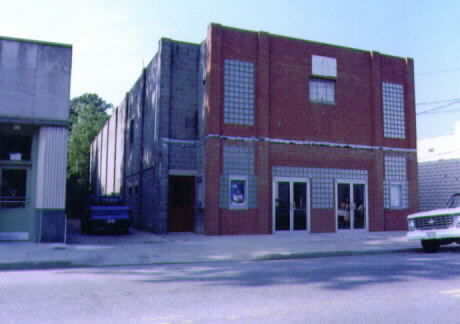 Located on Main Street (today renamed Old Virginia Street, next door to what is now the ABC Virginia store). The Rappanna Theatre opened October 6, 1931. Seating was provided for 225.

The original building burned down on February 24 1949, and it was rebuilt in an Art Deco style, reopening October 13, 1949. It had seating for 500 in orchestra and balcony levels. The town postmaster was one of the owners of the theatre.

The Rappanna Theatre operated as a movie theatre until February 1982, and for a while after, it was used for performances and other events.

I would like to make a few corrections to the above information, and add some additional.
1) The street was never ‘Main St.’ It originally had been ‘Virginia Street’ and later re-named ‘Old Virginia Street’. The confusion may have been due to the small town only having two main streets, ‘Old Virginia St’, and ‘Cross St.'
2) it was located East of a newer building, which is the state owned, 'Virginia ABC Store’ (the State of Virginia Alcoholic Beverage Commission").
3) Confusion in the seating capacity: More likely there was capacity for 225 seats, and not 500. The population of the entire town was only about 500 back then.
4) The map has the spot (A) wrong. The theatre was more easterly, and closer to Cross St, just about 150 ft. after Upton Place.
Additional Info:
a) It was not a chain, but privately owned.
b) The spot is a vacant lot, next door to (East, or right facing) the ABC store.

I would be most appreciative if anyone that has a post card, or even a photo, of this theatre from back then would share it with me. I have seen a later photo, but it is washed out, and sort of pinkish, which it was not back then,
Thank you for this opportunity,
Dave W>

Opened ~1935? Can anyone verify the exact date?

I have an ad dated Feb. 1, 1973 for this theater playing “Hannie Caulder” with Raquel Welch

I took the photo that is on this site. That building is now gone.

Based on information in the Motion Picture Daily and local newspaper ads, the Theater operated from 1931 to 1982.

A March 4, 1982 story states that the interior of the theater was covered with soot when the furnace malfunctioned and that it would reopen when possible. I can find no record of it opening as a movie theater though I have been told that it operated as a venue for fund raisers and local plays for a while.

Quoting a news story- “The Middlesex Volunteer Fire Department upgraded its equipment. For years the company raised money by running the Rapanna Theater. In 1992, the company bought a $280,000 fire truck with proceeds from the theater and bingo.”

In Jan 1996, the theater building collapsed due to heavy snow and ice. It was demolished and now is an empty lot.

Been away from this site for a while. Now, back with more comments re:the Rappanna Theatre.

Again, I will state, there never was a Main Street in Urbanna, VA!!!
The street has always been named Virginia Street!!!

Owners then were Mr. Cuthbert Bristow, (Postmaster for the Town), and another resident who was a builder in town (his name escapes me right now).

I think that the information above is incorrect regarding the Regal Theater and The Rappanna.

Ad appearing in the local newspaper indicates that they were separate locations.

The address listed for the Rappanna Theatre is 235 Virginia Ave and the Regal was listed at 251 Virginia Ave.

Movie ads show the Regal operating as late as July 7, 1938 playing Snow White and the Seven Dwarfs. It was open as early as Feb 1983 per a story in the local news. It had 225 seats and was later used as the Town Hall.

The Rappanna Theatre was opened Oct 16, 1931 per ad in local newspaper. It had 225 seats also. During the days before integration, Blacks were allowed to attend but had to sit in the balcony. There was a fire on Feb. 24, 1949 that destroyed the building and it was rebuilt and re-opened on Oct 13, 1949.

It was operated by the Local Volunteer Fire Department from 1964 to 1982 as a fund raiser. They actually purchased the building in 1967.

In February 1982, the interior of the theater was covered with a layer of soot when the furnace malfunctioned and it was closed. Does not appear that it opened again as a movie theater

In its last days it served as a venue for community events.

It was sold in April 1984 to local businessmen who opened a Teen Club called the Balcony.

One bit of trivia that I found interesting is that in 1938,it played a short documentary demonstrating 3D -with colored glasses being supplied to the patrons.