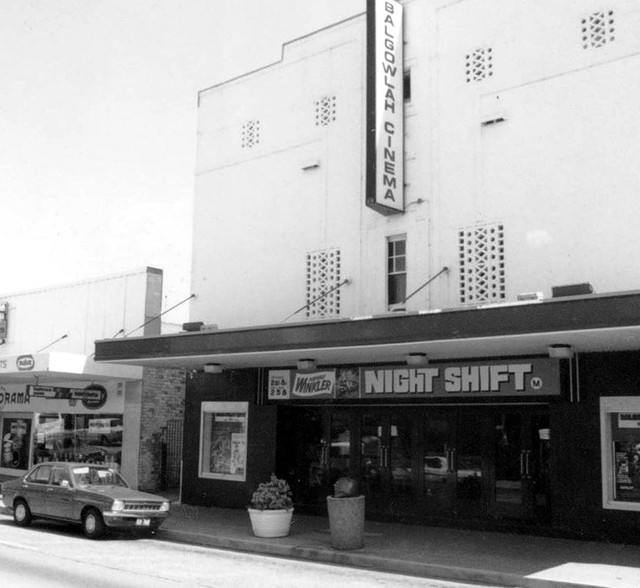 Balgowlah is a small harbour suburb adjacent to Manly in northeast Sydney. The Balgowlah Theatre began life as the Balgowlah Hall, an all purpose meeting place. Between politicians lectures, union meetings and fancy dress balls, silent movie screenings were held. Cedric Ashton, who went on to be a cellist with the Sydney Symphony Orchestra, recalled playing cello in the orchestra pit and dreaded the rowdy Saturday matinees.

Competition from Manly’s big cinemas was fierce, and by November 1930 the Balgowlah Theatre was in liquidation. It emerged and equipped for ‘talkies’ presented itself as ‘Where the Best Pictures Are Presented with Incomparable Sound’. In the 1930’s it was owned by Manly Theatres Ltd. who also owned the Rialto Theatre, Arcadia Theatre and Embassy Theatre. In the early-1950’s it was operated by the Snider & Dean Theatres chain.

In 1934, architects Herbert & Wilson were engaged to revamp the building with a modest Art Deco style.

In 1974, the sale was recorded for Bill Glass who bought the Balgowlah Theatre for $130,000. He installed new seating, sound and upgraded the screen. He planned to screen old time movies, much as the former Metro Theatre in Manly had done operating as the Silver Screen.

The Manly Daily reported the closure of the Balgowlah Theatre in 1985. Lessee Dawn Leyden said the operating costs were just too high, and the property went up for auction. The last programme was a Clint Eastwood double bill “Tightrope” and “City Heat”. The building was demolished and a mixed retail/commercial mini-plaza now occupies the site.