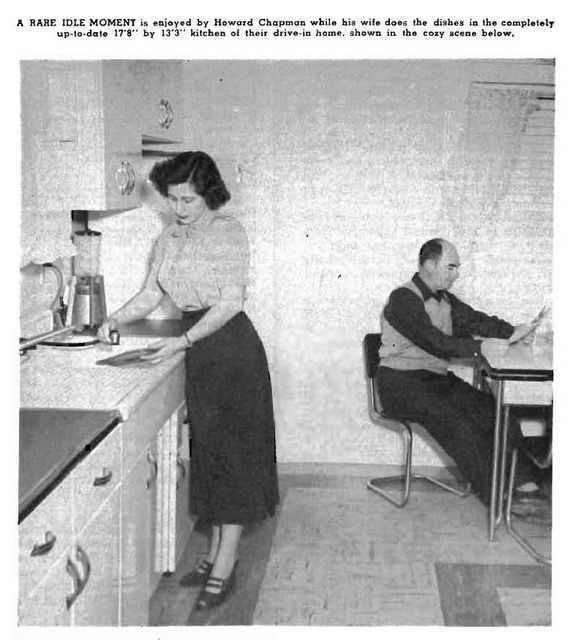 The Cherry Hill Open Air Theatre opened I believe on August 26, 1949. Featuring the 1938 movie “The Adventures of Robin Hood” with Errol Flynn and Olivia De Havilland. It was built and owned by Howard P. Chapman and Azalea Chapman, his wife. Chapman also operated the Cowpens Theatre, and the Gem Theatre in Cowpens before it burnt down in January 1948. He also looked after 150 acres of peach orchards and some rental property. When Chapman built the screen tower, he built a two story, twelve room house for his family inside the supporting structure. Chapman figures he saved $175 monthly by living there, eliminating expenses of a night watchman and rent.

The drive-in was surrounded by a white fence covering the 4 ½ acres. It gave their two children, Marsh & Tommy, who were 6 and 2 when it opened in 1949, plenty of space in which to play. One of the responsibilities of the children was to help their mother to clean up the parking ramp of popcorn boxes, paper cups and trash after each show.

It featured a 450-cars parking on eight ramps with multiple use of some of the 318 in-a-car speakers. Marsha recalled when the parking ramp was full, people still wanted to park without having a speaker. She remembers due to the stillness of the countryside, you could still hear the movies from other speakers. The parking ramp was illuminated by ‘Moonlite’ lighting. The screen tower was decorated with a border of blue neon tubing running across the top and ten feet down the sides. Three large red neon cherries with green leaves and stems were on each side of the screen tower roof.

The projection booth, restrooms and concession stand were located in the middle of the parking ramp. It also had benches for seating walk-in customers. With all the drive-in’s operating in neighboring Spartanburg and people buying more televisions for home, business slowed down in the late-1950’s. Howard Chapman’s declining health contributed to them just being open weekends, instead of screening movies seven nights a week. In December 1959, they decided to close the ‘Mom & Pop’ Cherry Hill Drive-In. The property was sold and the screen tower with a house in it was remodeled into a barn and the screen tower was removed. The site is now an auto junk yard.

A home was in the screen tower.

thanks Bob,every ad i saw never had an address.

Based on the address above and with confirmation from my father-in-law, the location on the map is incorrect. It was located on Cherry Hill Road which is South of Cowpens. The theater was located immediately west of Broome High School. It looks to be some kind of salvage yard now.

That is the correct address. Goggle maps are off sometimes. Use Bing maps.

The Address listed above is 100% incorrect. My Great Uncle purchased the property from The Chapmans, and it was passed down to my father. It is Also located in Spartanburg, SC and not Cowpens.