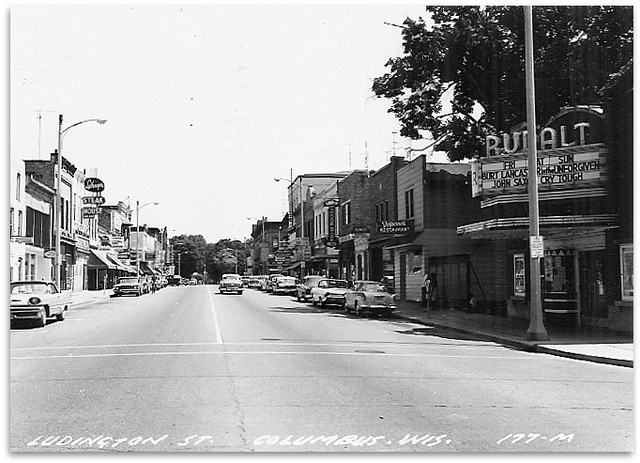 This page from the Wisconsin Historical Society says that the auditorium in Columbus’s City Hall had, among its other functions, “…served as a motion picture theater until the local Rudalt Theater was built in 1917.”

From 1960 a photo postcard of the Rudalt Theater in Columbus WI.

The Columbus Journal periodically runs a feature with news bits from 10, 20, 30, 40, and 50 years ago. Of the four instances of the feature online, all mention the Rudalt Theatre in 1960 or 1961, but not for any of the later decades. As whoever writes the feature apparently considers the theater’s program worthy of inclusion, it seems likely they’d include it for later decades if it had still been in operation. The most recent column says that on March 30, 1961, the Rudalt was showing Disney’s “Swiss Family Robinson,” and that “Butterfield 8” was scheduled for the following week. The Rudalt was open at least into April, 1961, but was probably closed by 1970.

Status should be demolished. The address given is incorrect. More llikely it is 151 South Ludington. This picture taken today from that location matches Don Lewis' postcard picture.

Notice that the sign for the steakhouse is identical to the 1960 picture, as well as is the cornice on the building adjacent to it . The theater has been replaced by the Columbus Public Safety Building at the right in this picture.

Ludington Street has a lot of handsome old buildings. It’s too bad the Rudalt Theatre is no longer among them.

The City of Columbus web site gives the address of the Police Department as 159 S. Ludington Street. The theater’s entrance was closer to the corner, so it might have been at 161 S. Ludington. The style of the Public Safety Building is late Midcentury Modern, with no hint of ‘80s postmodernism about it. I’d guess it was most likely built in the 1960s or 1970s, so the theater was probably demolished during one of those decades.

I think the “M” was probably a typo (“Cowker” certainly was), and the architect was Frank W. Andree, who had offices in the Cawker Building in Milwaukee at least as early as 1910.

Ken, this must be the same Frank Andree you identified as architect of the State Theatre in Milwaukee.

The name ‘RUDALT’ was a contraction of the names of its builders Emil Rudloff and Henry “Crafty” Altschlager. The theatre was closed through 1941 because of a fire. Henry died in 1944, and his son Luke took control and operated the projectors. The RUDALT Theatre closed in 1962, and the Columbus Police Department occupies its footprint.