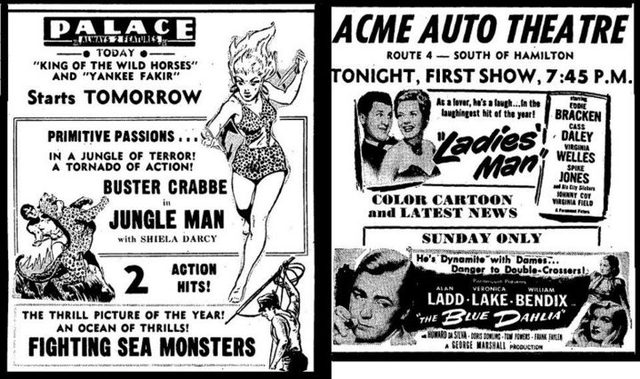 The Outdoor Auto Theatre opened on April 28, 1945, featuring the 1944 musical “Four Jills in a Jeep” with Carol Landis, Martha Raye, Kay Francis and Mitzi Mayfair. The second feature of the evening was “Goin' to Town”. I believe it was opened by Marc Cummins and later on with Ben Cohen. They were using the business name of Holiday Amusements Company. It reopened on April 27, 1948 as the Acme Auto Theatre. In 1964, the auto theatre had Golden Hot-Shot car heaters installed by Eprad Theatre Supply out of Toledo, OH. It was now equipped for year-round operation with electric car heaters. Eprad was owned by Al Boudouris. In 1970 the drive-in was advertised as the Acme Drive-In.

Cohen would have problems in the early-1970’s by showing X-rated movies at the Acme Drive-In. In August of 1972, he received a call about the showing of “Fritz the Cat”, and “All Pretty Maids in a Row” at the Acme Drive-In. A citizen group pressured the Fairfield police into calling him because of the displays of sex and profanity. He decided to drop the second week of showing both of the movies. Ben Cohen died at the early age of 57 in May of 1974. The Acme Drive-In, Holiday Drive-In and Colonial Drive-In continued to operate until the end of the 1987 drive-in season and they all closed for good. The Acme Drive-In was demolished and the property sold for retail and small businesses. As a tribute to the Acme Drive-In, one of the streets is named Acme Drive.