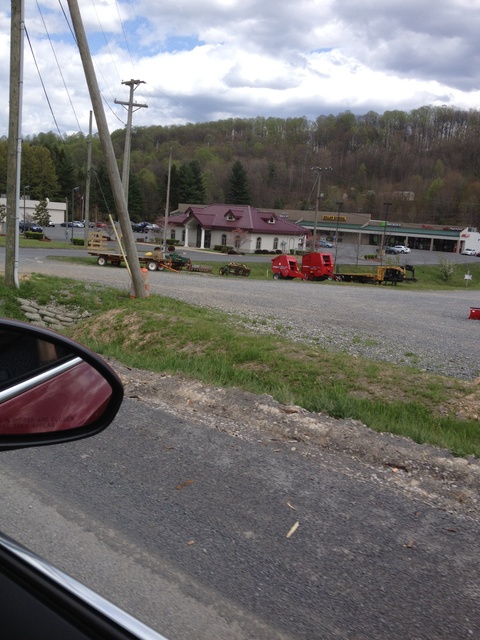 Opened on August 1, 1949 with Fredric March in “Another Part of the Forest”, the Crab Orchard Drive-In makes Cinema Treasures because of an advertisement I saw in the September 7, 1964 edition of Boxoffice. It was one of many drive-ins getting the Golden Hot-Shot car heaters installed by Eprad Theatre Supply.

I came here in the early 80s and saw a double feature of FLASHDANCE and FOOTLOOSE.

I never saw a movie there, but I can remember going through Crab Orchard on the way to Beckley in the back seat of mom and dads car and seeing that ominous, gigantic movie screen for many years. I don’t think it was demolished until the early 90’s. There is a Food Lion and auto parts store in that location now.

Drove by the location of the old Crab Orchard drive-in today, and noticed that the concrete foundation for the snack bar or projection booth was still there! Will have to stop soon and look and see if their are any more remains to be found!

Theater Owners Corporation owned the Crab Orchard drive in in 1955

On September 16, 1973, The Beckley Police Department And The West Virginia State Police Responded To The Crab Orchard Drive-In Due To The Showing Of X-Rated Films And Was Inappropriate In The Area To Show Explicit Films To The Public.

While showing the film “Love Feast”, Larry W. Warden of Crab Orchard, the projectionist and son of the owner of the Crab Orchard Drive-In and produced a warrant for the confiscation of the film and was arrested. Eugene Warden was also named on the warrant issued by Magistrate Joe Rodriguez And Obtained By Cpl. A. C. Bartlett of the West Virginia State Police. Eugene, the owner, was not at the theater at the time. According to the warrant, the film was taken as “a whole, appealed to the prurient interest in inappropriate material and portrayed explicit conduct in a patently offensive way in violation of Section #6066 of the West Virginia Code.” During and right after the film showed around the midnight hours to 1:00 AM Eastern Daylight Time, Cpl. Bartlett and Troopers R. E. Estepp and B. A. Vaughian stationed themselves at the entrance of the theater to determine if juveniles, 17 or younger, had ALSO been viewing the film. The X-Rated film was shown following 2 other features, with one being an R film with the latter rating permitted viewing by juveniles only accompanied by an adult, like what the MPAA demonstrated before each show. The film “Love Machine” which was scheduled originally the following weekend was confiscated and replied that it was “bad enough” according to Bartlett himself. Police intended to give a private showing of the film and trailer to a grand jury convened on that day.

The value of the confiscated film was estimated between $500-$1,000 according to a younger Ward. The theater at the time was expecting a major raid because of the announced crackdown on explicit films by the Beckley Police Department and West Virginia State Police. The confiscated film was also viewed by officers days prior on the 14th. One employee, a female, of the COD-I who refused to be identified replied that “X-rated films were very popular with the public. The people in the area get calls all week long asking how good or how “hot” the latest feature will be”.

In the other note, the theater had been displaying both first-run R-films, explicit X-rated material, and others at random times since 1969 and 1970 but fallen down and turned the corner around for a short period of time during Christmas Week of 1970 when a documentary of Elvis and How The West Was Won began playing at the theater. Right after the stunting week, the theater turned back the corner and climbed back up with R and X films for at least another decade (except for some parts) but not sure yet because the closing date is not known.