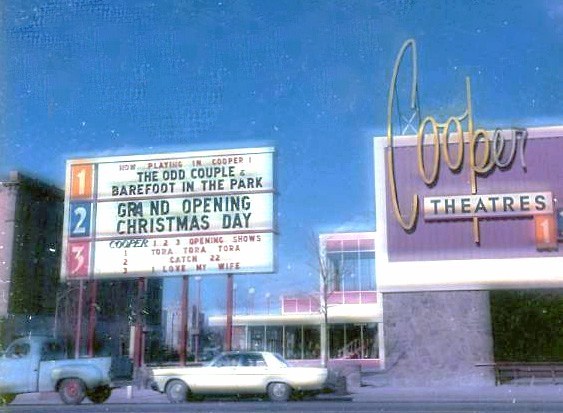 The Cooper Foundation opened the Cooper 70 theatre in 1963 on the site of the old Tompkin Theatre. The single screen Cooper 70 had 832 seats. Two additional screens were built and it re-opened as a triple screen theatre on December 25, 1970, with seating capacities of 406 & 418 in the new screens.

This opened as Cooper 70 in November 1963 and became Cooper 123 on December 24th, 1970. The grand opening celebration for this cinema was cancelled when President Kennedy was assassinated in Dallas. Cooper sold it to Commonwealth in 1975. I think it closed in the late 1980’s.

The Cooper Foundation’s web site once had a PDF with a history of Cooper Theaters, but it is no longer available. The PDF said that the Cooper 70 and the Ute 70 projects were both designed by Mel C. Glatz of Mel C. Glatz & Associates, in association with architect Maynard Rorman. The same team designed the conversion of the Cooper into a triplex.

Ah, the Cooper 1,2,3. My grandmother took me to see movies there in the early 80’s. It did close its doors in the late 1980’s, about 87' or 88' I believe. The building sat vacant in its original state, being used only for Postal Vehicle parking, until the late 90’s when it was completly remodeled into a small shopping center with a fast food restaraunt. In 2008 it was completly demolished minus a few walls and the foundation and is now a high end buisness plaza.

See Boxoffice magazine for August 30, 1971, for more details in the Modern Theatre Section beginning on page 12. This is for the Cooper 1,2,3 Theatre complex.

Does anyone in the Colorado Springs area remember a single screen theater that showed off beat movies at midnight on weekends? I think it was on upper Platte near the Citadel. I was stationed at Carson 73-75 and went there quite often. Is the building still there? I do know Cooper 1-2-3 was our theater of choice being near the bus station made in convenient but I also seem to remember a multi screen theater at the Citadel mall. Am I right on that? I enjoyed my years in the Springs and look forward to coming back to visit in the near future.

Hhc632: I’m not from Colorado Springs, but could the theater you recall be the Cinema 70, located on Chelton Road just off of East Platte?

As for the multiplex at the mall, the only one we have listed is Picture Show at Citadel Crossing, which is actually across the street and apparently didn’t open until the early 1990s, so it probably isn’t the one you remember. I’ve seen a couple of references to a theater having operated in the mall in the 1970s, but haven’t found any details about it, other than that it has been closed and probably demolished for the expansion of a department store. It isn’t listed at Cinema Treasures yet.

Here is a clickable link to the 1971 Boxoffice article kornpopper76 cited about the conversion of the Cooper 70 into a triplex. The seating capacity of the Cooper 1-2-3 was 1,656, with 832 seats in the original theater and 406 and 418 in Cinemas 2 and 3, respectively. Theater designer Mel C. Glatz collaborated with the architectural firm of Knight & Rorman on the expansion project.

Hhc632: The multiplex at the mall belonged to General Cinema Corporation (GCC). They sold all their Colorado theatres several years ago. I worked at several in the Denver area from 1976-1978.

I was hired in December 1974 (by “kornpopper76”!!) as an usher at the Cooper 1-2-3. Over the next ten years, I managed several Colorado Springs theatres, including the Cooper from January 1983 to July 1984. I have numerous photos of the Cooper that I’ll upload soon. I do have some additional info about the theatre:

I was a D.M. for General Cinema, when visiting my theaters in this city a number of times took in a show here, it was a wonderful theater to see a film in