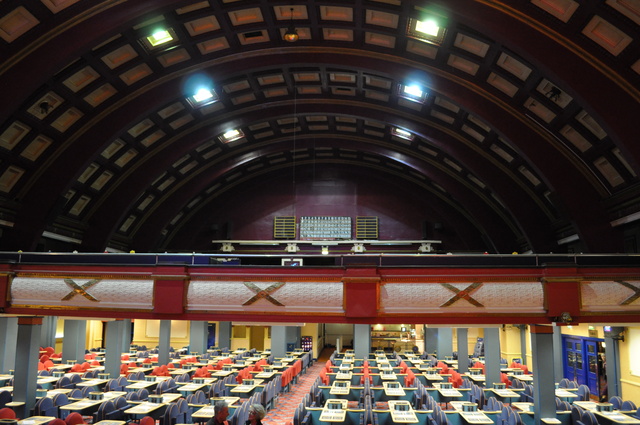 Located facing the Promenade in the sea-side town of Whitley Bay, north of Newcastle upon Tyne. The Spanish City Theatre was part of a large amusement park & leisure complex, which consisted of a fairground with roller coaster and other rides, an indoor Pavilion, roof garden & tea room.

Opened on 7th May 1910, it was an early example of a concrete & steel structure, designed in an Italian Renaissance style by architects Robert Burns Dick, Charles T. Marshall & James Cackett. Seating in the theatre was provided for 1,400 in the stalls and 400 in the balcony. The coffered barrel shaped ceiling is divided into bays by arched beams.

In June 1910, one month after opening, a projection box was installed and silent films became part of the variety programme. Films continued to be screened during World War I, together with vaudeville acts.

The theatre was flat floored, and in 1920 became the Empress Ballroom, which continued until 1961. Since then it has been operated by the independent Carlton Bingo Club.

The Spanish City complex had become run down by the early-1990’s, and most of the buildings and attractions had closed. In 2011, the site weas taken over by Tyneside District Council, and the architectural firm ADP Partnership are now working on renovations to the Pavilion building. Sadly the fairground and other buildings have been demolished, and a hotel and possibly a cinema will be built on the site of those. Completion for the renovations is set for 2014.

The dome on the Pavilion of Spanish City is designated a Grade II Listed building.

Two shots of the Spanish City Theatre / Carlton Bingo from 2009:–

Another much earlier shot of the proscenium arch (circa 1994)