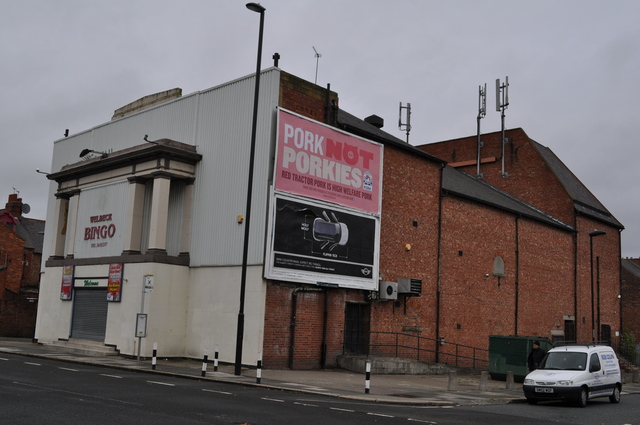 Located near the corner of Scrogg Road & Byker Street in the Walker district of Newcastle upon Tyne. The Welbeck Cinema & Playhouse was opened as a cine-variety theatre on 4th November 1929. Designed by Newcastle architect J. Newton Fatkin, it had an attractive facade in white stone, that featured a centrally placed balcony over the entrance. Inside the auditorium the seating was arranged for 360 in the stalls, 290 in the pit stalls and 315 in the circle. The proscenium was 29 feet wide, and there was a 30 feet deep stage and fly tower. The six dressing rooms were below the stage. Variety acts were part of the programme for the first 10 years, after which the word ‘Playhouse’ was dropped, and it became a full time cinema.

The attractive facade was covered over by sheet metal cladding, and it became a Noble Bingo Club. It operated as an independent bingo club until 2012. It has now been converted into a banquet hall/function suite.