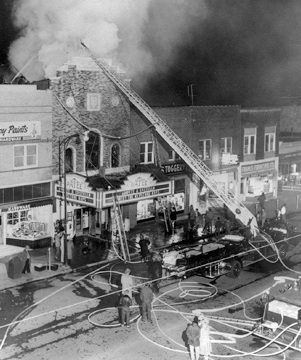 The Patee Theatre was built and opened in 1913, replacing the earlier Patee Theatre located at 708 Massachusetts Street. It was later operated by Commonwealth Amusement. Still operated by them in 1943, by 1950 it was under a different operating company and had been remodeled and reopened as the New Patee Theatre. It was gutted by a fire February 28, 1955 and was demolished November 21, 1955.

The Boxoffice article Tinseltoes linked to says that the Patee Theatre was built in 1903. However, this page from the Watkins Museum of History says that the house opened by Clair and Vivian Patee in 1903 was at 708 Massachusetts Street, and was originally called the Nickel Theatre.

It was in 1913 that they opened the Patee Theatre at 828 Massachusetts Street. The Patee Theatre was gutted by a fire in March, 1955, and the building demolished later that year. The location of the theater’s entrance is now the site of a pedestrian walkway to a parking lot. The original Nickel Theatre building is now a bookshop.

The page has a slide show with photos of both theaters, but they are all just front views.

Here is an additional photo showing the Patee Theatre around the time of its opening in 1913.

This brief article about Clair Patee, owner of the Patee Theatre, appeared in the July 12, 1930, issue of Motion Picture News:

“Oldest Showman In U. S., Is Claim Of Clair Patee

“Topeka, Kas. — This may force the line to form to the right, but it is, nevertheless, the claim of Clair M. Patee, owner of the Patee theatre at Lawrence, that he is the oldest exhibitor in the United States. Not only that, but Patee asserts that claim has never been contested.

“Patee has never missed an MPTO convention — ‘since they have been having them,’ he adds. He has attended all of the twelve annual conclaves of the Kansas and Missouri unit. He personally published a pamphlet called ‘Facts,’ the sheets of which show publicity in early form. It was a four-page weekly, in which was a queer assemblage of reading matter, fashion notes, home hints, recipes, school news, and — carefully sandwiched in between — facts about the then new picture business.

“In those days, Patee says, the public did not look with a very friendly eye upon pictures. They were in the category of ‘fakes.’ The purpose of ‘Facts’ was to tactfully dispel this idea and to gain favor for the pictures.

“In Lawrence, his home, Patee has been an exhibitor since the ‘Patee Nickel’ was opened in 1903. His house now is called simply the ‘Patee.’ It is different from many houses in that it is on the English plan, with the choice, and highest-priced seats, in the balcony.”

Stumbled across an article while researching in a May 26, 1923 issue of “Universal Weekly” pp. 6-7 that says “Clair M. Pattee [sic] of the Pattee Theatre, Lawrence, Kansas, the first motion picture exhibitor west of the Mississippi River.”