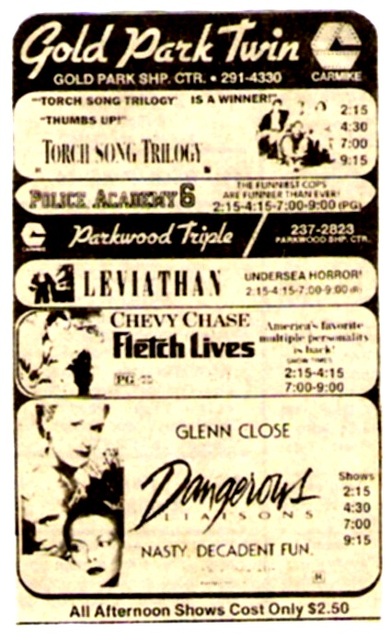 The Gold Park Cinema 1&2 was opened on August 19, 1977 by Stewart & Everett Theatres (who also owned the Parkwood Cinema at Parkwood Mall). The twin theater was part of Gold Park Shopping Center (now Toisnot Village), located on the Raleigh Road side of the shopping center near J.C. Harris Cadillac. Each auditorium seated 200.

The seating capacity for this theater was at 400,which Auditoriums One and Two seated 200 each. The opening attractions for the grand opening of the GOLD PARK were on Screen 1: Richard Harris in “ORCA”. Playing on Screen 2 was “THE BAD NEWS BEARS IN BREAKING TRAINING” with Tatum O'Neal and Tony Curtis.