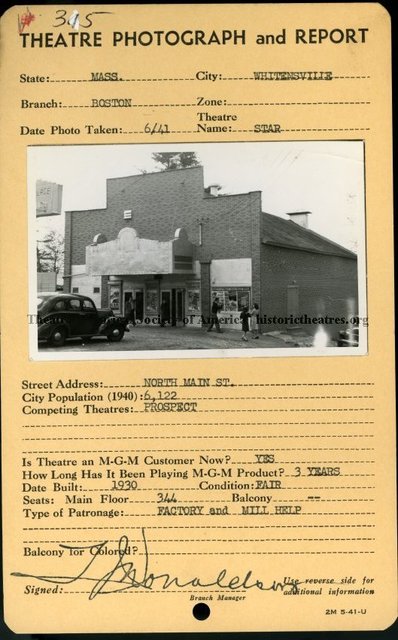 The Star Theatre was operating prior to 1941, and continued until at least 1950.

The Star Theatre in Whitensville was included in the MGM Theatre Photograph and Report project. It includes a photo of the theater taken in June 1941. It was a free-standing structure 2 stories high, with a center entrance and a boxy marquee above. The Report says that the Star was on North Main St., that it had been showing MGM product for 3 years, was built about 1930, was in Fair condition and had 344 seats, apparently all on one floor. A competing theater was the Prospect Th. in Whitensville. The patronage was described as “factory and mill help”. The 1941 population of Whitensville was 6,100.

Ron, I am a Historian for Northbridge/Whitinsvile and am desperately seeking images of these local cinemas. I can’t seem to find any info on the MGM Theatre Photograph and Report project online. Do you or anyone know where I can get images of the star and/or prospect theatre?