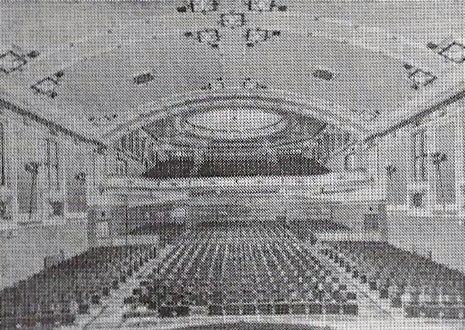 Located in the Hall Green district of Birmingham. It had a prominent corner position on Stratford Road and Greenbank Avenue. The Rialto Cinema was opened on 3rd October 1927 with Constance Talmadge in “Breakfast at Sunrise” and Marcella Albani in “Circus Life”. It was owned by the Springfield Picture Playhouse Ltd. Seating was provided in stalls and circle levels. The side-walls were decorated with spears & shields, and there were torches on top of long poles, which were topped with a light fixtures. There were also mural decorations of Roman charioteers. On 24th March 1930, the Rialto Cinema was equipped with a Compton (Model J) 2Manual/5Ranks organ, which was opened by organists Frederick Warrender & Foley Bates.

The Rialto Cinema was closed on 30th May 1959 with Sophia Loren in “Black Orchid” and Charles Bronson in “When Hell Broke Loose”. It was demolished and a supermarket was built on the site, in 2009 its a Somerfield supermarket.