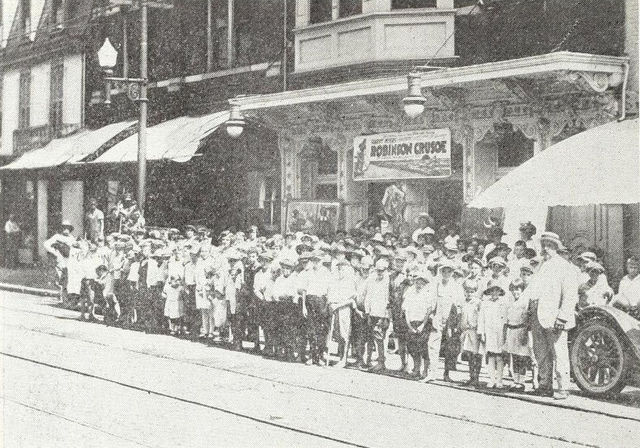 A history of Maysville theaters that was included in the NRHP nomination form for the Russell Theatre says that the Hollywood Theatre opened in April, 1909, as the Pastime Theatre. It was located at 113 West Second Street, in the Knights of Pythias building, which was across the street from the Washington Opera Theatre. The Pastime Theatre had 225 seats.

In 1926 the house changed hands, and was renamed the Hollywood Theatre. It was sold again, in 1938, to the operators of the Washington Opera Theatre, who closed it in 1941.

As near as I can figure, the Pastime/Hollywood Theatre was in one of the two buildings in this Street View. Both are across the street from the Washington Opera Theatre, which is where the Hollywood was supposed to be. The three-story building is occupied by a business called Anna’s Backstage, but I can’t find its address. The two-story building looks vacant.

The address is 115 W. Second Street, directly across the street from the Washington Theatre at 116.