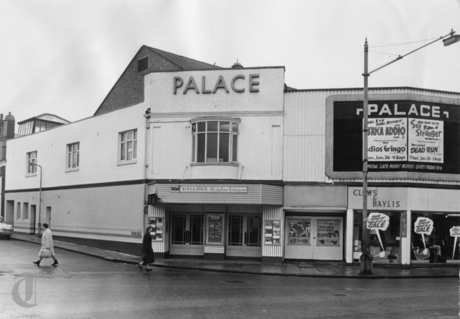 The New Palace Cinema was designed by Bradford based architect R. Pitcher, and was opened on 10th December 1928 with “Sailors Don’t Care” and “Shield of Honor”. Seating was provided for 990 in stalls and circle levels, and the proscenium was 20 feet wide. The ‘old’ Palace Cinema building was converted into a roller skating rink. In 1931, it became the Palace Ballroom.

The New Palace Cinema was damaged by a fire which destroyed the former Palace Cinema on 7th January 1970 (that building was being used as a market at that time). It was closed for two months while repairs were carried out to the roof.

The New Palace Cinema was re-opened on 5th April 1970 with George Lazenby in “On Her Majesties Secret Service”. It was closed on 15th September 1979 with Roger Moore in “Moonraker”. The building was demolished and the inner ring-road Roanne Ringway now passes across the site.