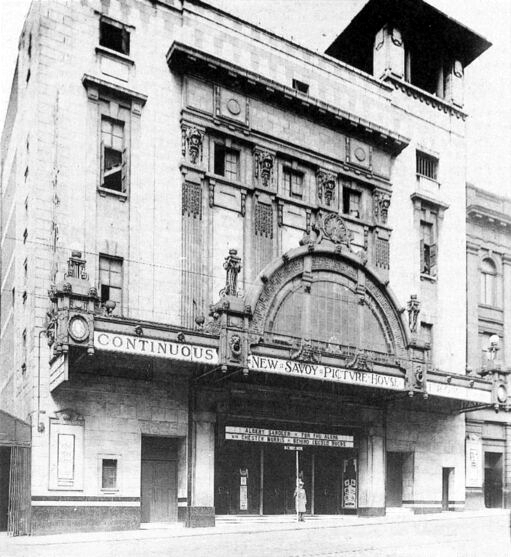 Located in Glasgow city centre. This was originally a music hall which opened in December 1911 with seating provided in orchestra stalls, dress circle and gallery levels. It was designed by architect James Miller.

On 12th December 1916, it was opened as the New Savoy Picture Theatre by the Biocolour Picture Theatres circuit, after alterations had been carried out by architect James A. Boswell, who removed the stage, and built a new proscenium set further back.

In November 1926, the Biocolour circuit was taken over by the Gaumont British Theatres chain. It was modernised and re-opened on 9th July 1934 and a 2Manual/7Ranks Christie organ was installed. The cinema was later renamed Savoy Cinema.

The Savoy Cinema was closed by the Rank Organisation on 27th September 1958 and was converted into the Majestic Ballroom, involving major alterations, and suspending a false ceiling inside. The Majestic Ballroom was closed on 15th January 1972, and soon after demolition began, the remains of the building were destroyed by a fire on 20th March 1972.

The Savoy Shopping Centre now stands on the site.