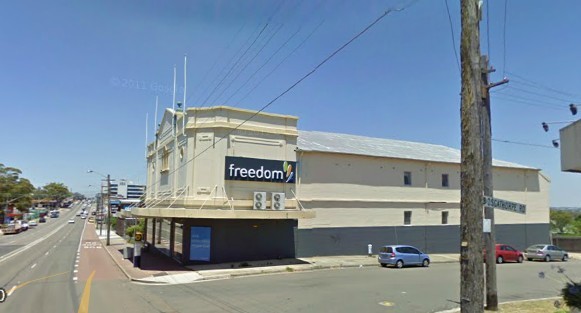 Gladesville is a suburb in the municipality of Ryde northwest of Sydney, and in the 1920’s was the scene of fierce competition in the theatre business. Leading entrepreneurs were Gus Bowe and James Park. Bowe hired architect C. Reynolds Winter to build a substantial cinema on his property on Victoria Road.

The Victory Theatre opened in 1926 but Bowe sold it to the Gladesville Theatre Company who closed it, but could reopen if another competitor moved in.

Only three of the dozen picture palaces built in this area survive today although all have been converted to retail and office use. They are the Gladesville Theatre on Wharf Road, the Palace Theatre on Argyle Avenue and the Victory Theatre.

After serving as a furniture showroom for many years, the Victory Theatre was demolished in June 2012.

Demolition has commenced as of June 2012.

The original screen was still in place until the 1980s takeover by Freedon Furniture.The last movie at the Victory was “Farmer Takes a Wife” (1935)and I think was mainly used as an overflow house for the nearby Palace in Jordan St Gladesville. The Victory saw many uses after closure.The auditorium was a box factory (30s-50s), a car repair shop 50s-early 60s, a bathroom furniture factory 60s -early 70s,Nock and Kirbys building centre 70s-80s and then Freedom Furniture. There were separate shops on either side of the front doors were two, one a lolly shop (on teh corner) and the other unknown except that in the late 30s one of my aunts ran it as a dress shop.In the mid 50s or so the two shops were removed and the foyer space opened right up as a showroom and offices for ‘Atom Motors’.Atom Motors had a used car lot immediately next door. The foyer space was added to about 1961/2 when the stairs to the dress circle were demolished completely cutting off this area and its hidden treasures. Atom Motors folded about 1963 and ‘Tom the Cheap Grocer’ took over operating until the 1970s. Sad we have lost the Victory and all its history for a daggy grog shop – as if Gladesville really needed another one

Gus Bowe, the original proprietor of the Victory, died in 1941 after an accident.He is buried in the family plot at the Field of Mars Cemetery,North Ryde. Gus had four or five brothers (who all remained bachelors as did he) and one sister. His sister, Mrs Stocqueler, went on to run the Rialto Theatre,Ryde with one of the brothers, until its closure in 1960

Gus Bowe was my grandmothers brother. He had 2 sisters Mrs Stocqueler and Anne Myrea Bowe (later McGovern). Mrs Stocqueler inherited all Gus Bowe’s properties in some very suspicious and it is alleged very dodgy circumstances. He had close to 100 properties including the movie theatres.