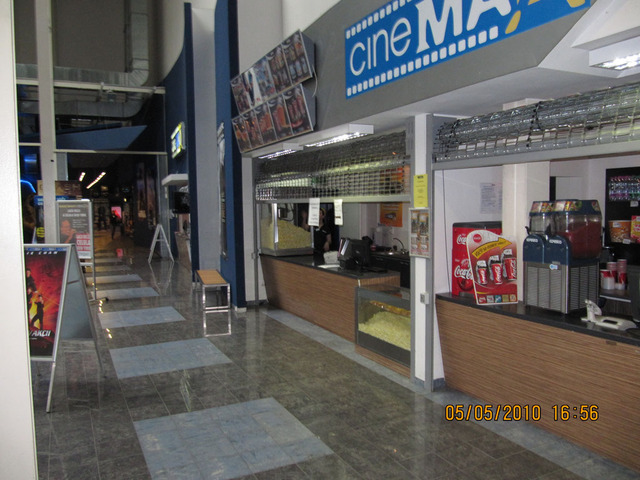 The CineMAX Trencin miniplex is located directly opposite the main entrance of the MAX shopping centre, on the first floor. The four air-conditioned auditoriums have a total capacity of 657 seats. The largest hall has 274 seats, the smallest 96 seats. Opening hours are from 3 pm to 10 pm weekdays and from 1 pm to 10 pm over the weekend.

The cinema with the initial name Istropolis Cinema Center Trencin opened 16th February, 2006. As of June 2011, three screens were digital, all of them used Christie projectors, Doremi cinema servers and an XpanD-3D-system. Sound technologies include Dolby Surround EX, Dolby Digital and Dolby Surround.

The shopping center MAX, which the miniplex is a part of, is located near the railway station and the city center of the west Slovak town Trencin. It was inaugurated 7th December, 2005 and has 460 parking spaces in the underground garage and outdoors. Trencin was once known for its textile industry (men’s suits); now the electronics industry (LCD modules) is particularly important.

Since its opening CineMAX Trencin is one of the official venues of Slovakia’s most important film festival Art Film Fest. A predominant number of the festival movies is screened in its halls. Other less congested venues are in the nearby spa town Trencianske Teplice and a single screen art cinema in Trencin (ArtKino Metro).

CineMAX Trencin is a member of Europa Cinemas, a film theatre network focusing on European films, with the objective to provide operational and financial support to cinemas that commit themselves to screen a significant number of European films.

Just like in other CineMAX miniplexes, main suppliers of refreshments are the CORNiCO Popcorn Company and the Coca Cola Company.

To the total attendance in Slovakia the Trencin cinema contributes an estimated 4 percent (estimated at around 120,000 viewers), to the total revenues around 5 percent (est. at 800-thousand Euro).

In Trencin is currently only one more cinema project planed, as a part of the extension of the Laugaricio shopping center in the south of the town. It is unknown when this expansion will be realized.

However, the cinema attendance can be jeopardized by a project in the neighboring district Prievidza, especially resetting the demand from this district. The three-screen theater Ster Century Cinemas Prievidza should open in April 2012.