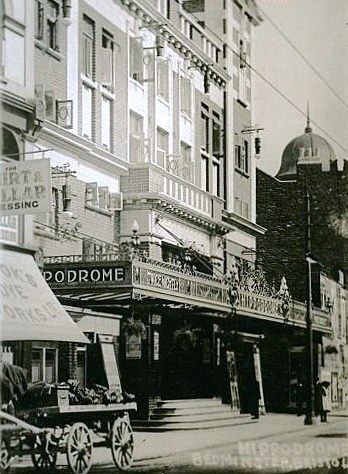 Located in the Bedminster district of Bristol, south of the River Avon on East Street between Essex Street & Lombard Street. The Bedminster Hippodrome Theatre was built by Walter de Freece as one of his chain of variety theatres, it opened in 1911. Designed by noted theatre architect Bertie Crewe, it was an attractive building in brick with white stone trimmings. Inside the auditorium seating was provided in orchestra stalls, dress circle and balcony. The proscenium was 38 feet wide and the stage 20 feet deep.

It was taken over by Oswald Stoll and converted into the Stoll Picture Theatre in May 1915. Occasional variety acts still played at the theatre in the 1930’s, including Tesse O-Shea and Randolph Sutton.

The Stoll Picture Theatre was badly damaged when the roof was destroyed by German bombs on 3rd January 1941. The remains of the building were demolished after the end of World War II.