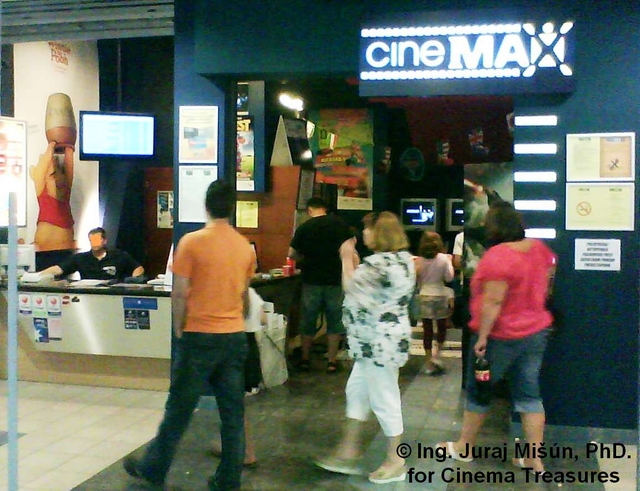 CineMAX Trnava was the first modern multi-screen cinema built in Slovakia outside of the capitol city Bratislava. It opened on 10th September 2004 as the SONYcineMAX. The theatre is located on the first floor of the MAX shopping centre near the railway station of the western Slovak town Trnava. The miniplex has three screens and a total capacity of 562 seats. The largest auditorium offers 265 seats. All three screens are digital and 3D capable using the Slovenian XpanD-3D technology with active shutter glasses.

Like the MAX shopping centres in Trencin, Poprad and Nitra, Trnava’s MAX is also the property of the General Electric Capitol Real Estate. The company purchased the 10,000-square meter mall for 14.3 million Euros in 2005.

The CineMAX cinema chain is owned by Continental Film, a local movie distributor who predominantly distributes movies from Warner Brothers and its subsidiary New Line Cinema. The brand Cinemax is also in the Slovak republic used by HBO television networks. CineMAX operates cinemas in the Slovak cities of Kosice, Nitra, Trencin, Dunajska Streda, Skalica, Zilina, Poprad and Presov. In 2011, Slovakia’s fifth largest cinema, Europa Cinemas in Banska Bystrica became part of the chain, when CineMAX purchased the theatre from the developer of the Europa Shopping Centre.

The opening hours in Trnava are limited, only from 3pm to 10pm weekdays and from 1pm to 10pm over the weekend.

Like other MAX shopping centres, the Trnava shopping centre has a problem with the prominence of its tenants. Anchors like Hennes & Mauritz (H&M), Clemens and August (C&A), ZARA, Peek & Cloppenburg or Marks & Spencer ignore these first generation shopping centres. Similarly, in the small food courts they lack tenants such as McDonalds, KFC, Subway or Nordsee.

However, in Trnava there are three more miniplex cinemas in shopping centres planned. The first one near the city centre, in a historical sugar factory which closed in 2004. The second one is planned directly opposite the car assembly plant PSA Peugeot Citroen, and the third one next to Slovakia’s most important motorway junction. Due to the current (ongoing in 2012) European debt crisis, all three projects have an ‘on hold’ status. Due to the rapid development of Trnava caused by the growth of the resident automobile industy, it is highly probable that another multi-screen cinema will open soon. Another argument to build a cinema is that this town of about 70,0000 people has four universities with thousands of students.