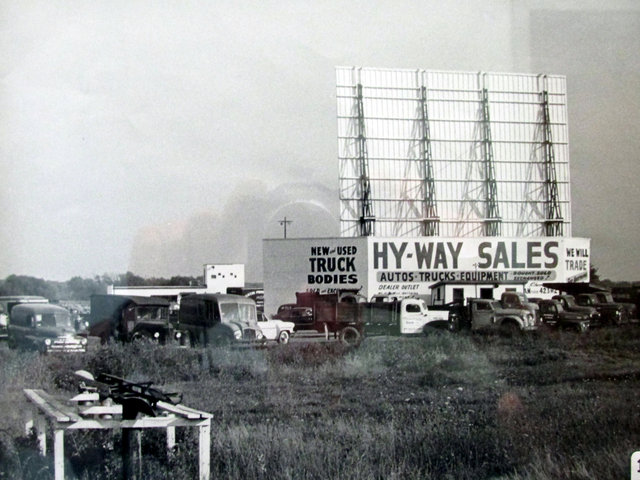 This very modest and now-forgotten outdoor theatre was located on busy US 41 and IL 173 in Newport Township. It seems to have only been open for one season, the summer of 1950, and was managed by a James E. McGrain. The box office was a small wooden structure, and the smallish south-facing screen was mounted on separate metal stanchions and was open at the bottom. The main building, of white-painted concrete block, contained the two-story projection booth, concessions and comfort stations; it remains today.

In 1950, the Hi-Way Drive-In was in a sparsely-populated area and the builder may have been hoping for more business from the passing traffic on US 41. After the Hi-Way Drive-In closed, the theatre property remained silent for about five years and then was sold to Hy Brosten who opened an auto salvage yard, using the old Hi-Way Drive-In main building as headquarters. The Hi-Way’s screen structure and box office did remain in place for another fifteen years or so, though both began looking a bit more forlorn with each passing season until their eventual demolition about twenty years after the Hi-Way Drive-In had screened its final feature. (Any information on the Hi-Way Drive-In Theatre is welcome.)

The Hi-Way Drive-In Theatre’s architect was Irving M. Karlin of Chicago, Illinois, who brought it in for a construction cost of $90,000. The capacity was listed as 628 cars. Opening day was July 1, 1950. By September, 1950, the admission price had been reduced to 55 cents.

Grand opening of the Hi-Way Outdoor theater, located at Rte. 173 on Skokie highway, just south of the state line, has been set for tonight, according to James E. Mc- Grain, manager of the new theater.

The latest developments in motion picture sound and projection equipment and a new type screen designed to furnish the best in outdoor movie entertainment have been incorporated into the open air movie palace.

Knowledge gained in more than 150 years of combined movie and entertainment experience by the operators of the theater insure sound selection of programs and smooth, courteous service to the patrons.

Something new in outdoor movie concessions will be the hot plate lunches to be served patrons in their cars.

Well-balanced menus of tempting, inexpensive meals will make it possible for the entire famiy to enjoy a holiday at the movies.

Construction of a drive-in being erected by Highway Amusement Enterprises, Inc. at the intersection of Routes 173 and 41 near here, is expected to be completed about July 1. With a capacity of 628 cars, the open-air theatre will cost approximately $90,000. The projection booth is to be located atop the concession stand. Irving M. Karlin, Chicago architect, designed the drive-in.

George May has been named receiver for the Highway Amusement Enterprises, Inc., operators of the Highway (sic) Outdoor Theatre here, and four other defendants in a mechanics lien proceeding.

Listed as co-defendants in the $65,000 mechanics lien proceedings are the Midwest Theatre Service and Equipment Co., Irving S. Karlin, architect and secretary of the operating corporation; John Selby, screen erection engineer; and Staben and Hooper, consulting engineers. May will safeguard the assets of the firms bringing liens against the theatre property which was constructed last fall.

Remarkably, research shows that after its opening at 7:30 pm CDT on Thursday, August 10, 1950 with Ray Milland and Rosalind Russell in “A Woman of Distinction”, the Hi-Way Outdoor Theatre near Wadsworth, Illinois was only open for a total of fifty-one days before it closed forever on Saturday, September 30, 1950 and fell into decades of disrepair. This may be some sort of a record in the realm of theatre failures. A guess as to the reason: the Hi-Way was then far removed from population centers. Its promoters may have made the assumption that enough cars on busy US 41 would spot the Hi-Way and make a quick decision to pull in for a double feature and that IL 173 would supply patrons from the east and west. Still, the immediate area was then lightly populated and the incorporated communities on 173 were somewhat distant. Also a time difference with Wisconsin – two miles north – may have mattered. Wisconsin didn’t then observe Daylight Saving Time and for Wisconsinites the Hi-Way opened at 6:30 PM CST. The far more deluxe Keno Family Outdoor Theatre was between Kenosha – ten miles distant – and the Hi-Way, which few Kenoshans knew of as the Hi-Way didn’t advertise in Kenosha.

The economic realities must have set in rather quickly. In a move to stay afloat, a new adult admission price of 55 cents was announced for Sunday, August 27, 1950. Children were still admitted free. The double feature that night was “Bride for Sale” with Claudette Colbert, Robert Young and George Brent plus “Singing Guns” with Vaughn Monroe.

It all ended on Saturday, September 30, 1950. “Three Came Home” with Claudette Colbert and “Sand” with Mark Stevens made up the final program. There’s no record on how many of the Hi-Way’s 500 parking spaces (some sources say 628) were occupied. The Hi-Way’s final ad in the Waukegan News-Sun in announcing what was called its “final performance of the 1950 season” thanked all its patrons for their past patronage and that they were “looking forward to seeing you all in the spring."
~~~~~~~~~~~~~~~~~~~~~~~~~~~~~~ Some facts on the Hi-Way Outdoor Theatre: Eugene Regenauer of 148 Fulton Ave. in Waukegan was the general contractor. The Hi-Way’s Magnascreen tower was 44 by 60 feet in size; the water-cooled projectors had 4-inch lenses and were elevated to avoid keystoning. Special emphasis was made on food service; Hi-Way patrons were handed menus upon entering the theatre and employees pushing insulated carts would deliver meals to the parked cars. In the Hi-Way’s main "Restaurant Building” one could order full dinners of Southern-fried chicken, barbecued baby pork spareribs, fish-and-chips or chopped steak at prices from 85 cents to $1.10. Children were always admitted free.

All throughout its too-short 51-day life the theatre’s motto was “Drive Over and Drive In”. Today that sounds like a tacit admission that even at its opening the unfortunate Hi-Way Outdoor Theatre was a bit isolated. Too distant to attract enough of those patrons who otherwise could have enjoyed its amenities and made it a lasting success.