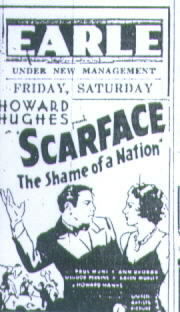 The Earle Theatre was opened on December 16, 1927 with Lewis Stone in “The Prince of Headwaiters”. It was closed April 25, 1961 with Richard Widmark in “The Secret Ways”.

The Earle closed in 1961. My aunt took me to the last movie they showed there, “The Great Impostor” with Tony Curtis.

After that the wrecking ball got the building and it was turned into a Park & Shop parking lot. It’s still a parking lot today.

First cinema in Allentown to be equipped for synchronized sound films. It opened on 16 December 1927, showing “The Prince of Headwaiters”, starring Lewis Stone, a mostly silent film which had scenes in sound. The cinema operated until February 1961, when it was closed.