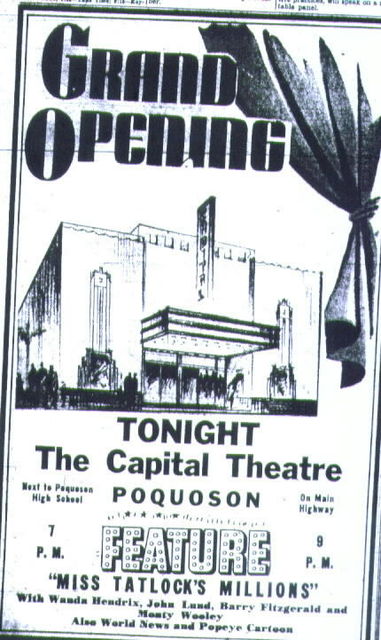 The Capital Theatre was opened on December 9, 1948.

I got the following note from a Poq. native who has memories of the Capital.

Capital Movie Theater located at 1022 Poquoson Avenue. When the Capital closed, it became a dress sewing factory. My mother worked there. Later became a Baptist church which burned down in 1992. Now located at the site is the St. Basil the Great Orthodox Church just down the street from the Poquoson Middle School which was Poquoson High School at the time. Not only movies were shown, but talent shows and country music acts such as Sunshine Sue were held. The first color movie I ever saw was at this theater and was “Sampson and Delilah” in the early 1950s. I also participated in the talent shows dancing with Field’s Dance Studio.

I was given a copy of a Fire Report dated Nov 29, 1951 showing a major fire at this theater causing an estimated damage of $20K. The last ad that I found in the newspaper was dated just a couple of days later – none after that. Assume that it never reopened.

i remember the old capitol theater so well— they use to have compitions there also— i remember playing the piano in one of the compitations—needless to say i didnt t win—lol— but momma entered me inn it and told me practice girl —and i did— i remember some of the stories about the old Capitol Theater— and even after when it was the zipper factory— and also the man that murdered his wife and then came and parked behind d the theater and killed himself—-and yes they had air conditioning —lol— was a good place to go and so was the Messick theater— at least we had someplace to walk too on the friday and saturday evenings and sunday was strickly church— youth fellowship—its a lot of the stories and memories of both theaters but i mainly went to Messick Thester— just to see mr. bucher and see if he still had his ring on !!! lol—such good memories and sweet laughter !!!