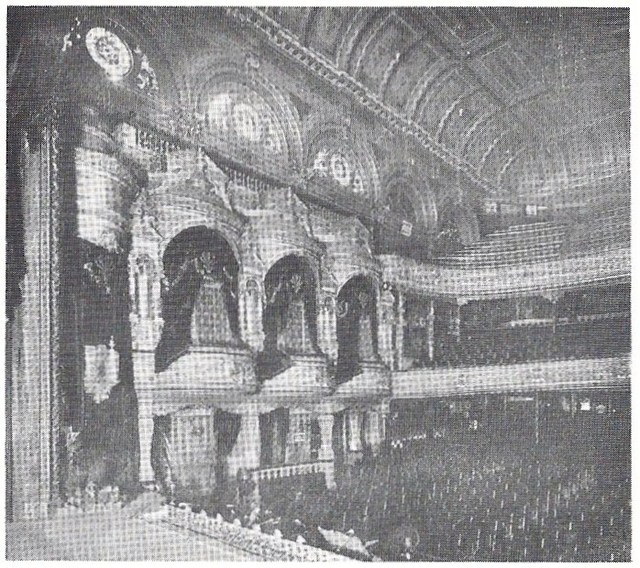 Located in Birmingham city centre at the corner of Smallbook Street and Hurst Street. The site had originally housed the White Swan Public House. A large hall was built at its rear which opened on 18th October 1862 as Days Crystal Palace Concert Hall. It was sold to Edward Moss of the Moss Empires Ltd. chain in September 1893, and was partially demolished to build his new Empire Palace Theatre.

Designed by noted theatre architect Frank Matcham in a splendid Italian Renaissance style. Seating for 2,000 was provided in orchestra stalls, dress circle and gallery, with standing room provided for 1,000. There were three large side boxes along the side-walls at dress circle level which were topped by elaborate domed canopies. The proscenium was edged with marble columns and the main ceiling had a painting by Ballard entitled ‘A Dream of the Carnival’.

The Empire Palace of Varieties opened on 7th May 1894 with Gus Ellen topping the bill. Over the years all the top names in music hall and variety played at the Birmingham Empire, including Marie Lloyd and Harry Lauder.

The Empire Theatre was redecorated in 1907 and films were being shown as part of the variety programme. Alterations were carried out in 1911, which included the addition of the Empire Lounge, which opened in 1912.

With its close proximity to the larger, still operating, Hippodrome Theatre on Hurst Street, the Empire Theatre gradually began to loose out. The end came abruptly on 24th October 1940, when the Empire Theatre was hit by German bombs, and was left in ruins. The remains of the building was demolished in 1950. Today, Smallbrook Ringway road now passes over the site.

The Empire was destroyed 24th October 1940 by enemy action.