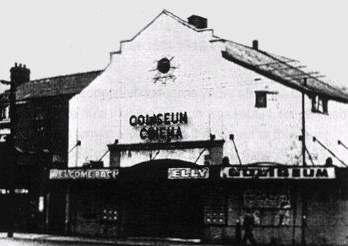 Located on Dudley Road near Frederick Street, in the Blakenhall district to the south of Wolverhampton. The Coliseum Cinema was opened on 14th November 1912. Designed by architect William Oliver, he was brought back in July 1913 to carry out additional building work which included an extension at the front of the building on Dudley Road. Seating was provided in stalls and circle levels.

The Coliseum Cinema was independently operated. It was closed in January 1959, but re-opened in June 1959. Closure to regular films came on 19th December 1959 with Michael Gough in “Horrors of the Black Museum”.

The building stood empty for several years, and was refurbished and re-opened in 1963 as an Asian cinema, screening East Indian ‘Bollywood’ films. This use continued until the late-1970’s, when the building came under threat of the construction of the new Wolverhampton Ring Road. It was demolished in April 1980.