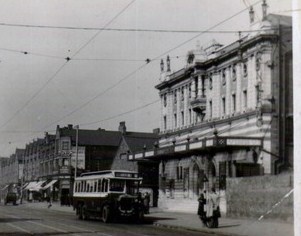 Located in the Bootle district of Liverpool on Knowsley Road near the corner of Elliot Street. The Gainsborough Cinema was opened on 18th May 1922. Seating was provided for 1,000 in the stalls and 300 in the circle. Built and operated by an independent operator, it was taken over by the Associated British Cinemas(ABC) chain on 1st June 1931.

The Gainsborough Cinema was closed by ABC on 12th November 1960 with Jerry Lewis in “The Bellboy” and “Tarzan the Magnificent”.

It was converted into a Mecca Bingo Club, which on 25th September 1962 and operated into the late-1980’s. After closing, the building stood empty and unused for many years. It was demolished around 2003, and the next-door Ryder car showrooms extended their business onto the site.