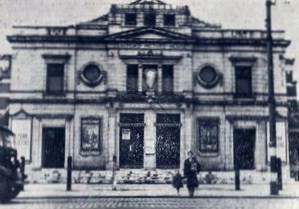 Located in the Old Trafford district of Manchester. The Trafford Picture House was opened in May 1922 and was built for the Reed, Snape & Ward circuit. It had a 30 feet wide proscenium.

It was taken over by the Associated British Cinemas(ABC) chain on 27th May 1935.

The Trafford Picture House was closed by ABC on 29th November 1958. It was then used as a car auction room for many years, but by 1993, they had moved out and the building was derelict. It was demolished around 2002.