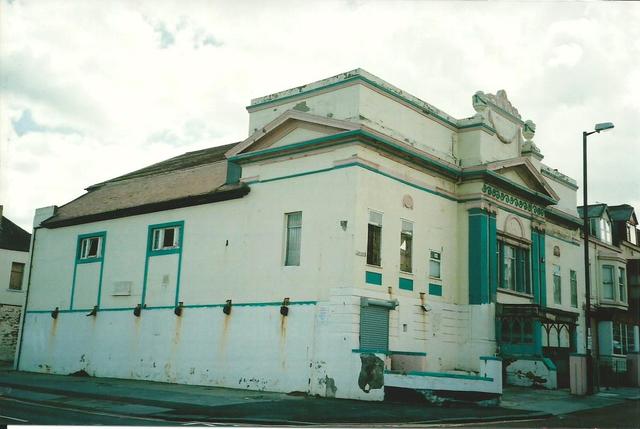 Located in Whitley Bay, a seaside town to the north of Newcastle upon Tyne, at the corner of Esplanade and Promenade. The Empire Cinema was opened 30th June 1910, and was part of the North of England Cinemas chain. It was designed by architect Henry Gibson (and possibly his partner Pascal Joseph Steinlet).

It was converted into a bingo club which opened in August 1962, and closed in October 1963. It was later a ballroom then Sylvester’s nightclub. In November 2008, the building stood empty and unused, but was demolished in 2009.

The former Gaumont was demolished several years ago, and in June 2009 the site was still vacant.

I would query the statement that it was taken over by an independent. Looking through the local newspaper from that time, I can find no evidence that it saw any further use as a cinema after Rank closed it. Latterly, it showed the National release, but subsequently, National releases were spread among the other three cinemas in the town. As a child, I recall seeing the Hammer version of “The Hound of the Baskervilles” at this cinema.

Another view of the former Empire here (c1994)

I used to go to this cinema when I lived in the town, it was the first projection box I was shown, amazing!. Memories of this Gaumont are the house lights, no dimmers just switched on or off, the same with the dressing on the tabs, side spotlights on or off. The stage was more of a shelf, very small, scope was as wide as the proscenium and the tabs had wires on the bottom to clear the screen, on some shows the doorman would appear with a long stick and poke them back into the small space provided. Later a festoon was added which I think came from the Gaumont, Newcastle. Top Rank records were played in the intermission and timed to perfection when the feature started. What ever happened to presentation!.

Photo uploaded of FOH prior to change of name to Gaumont circa 1950.