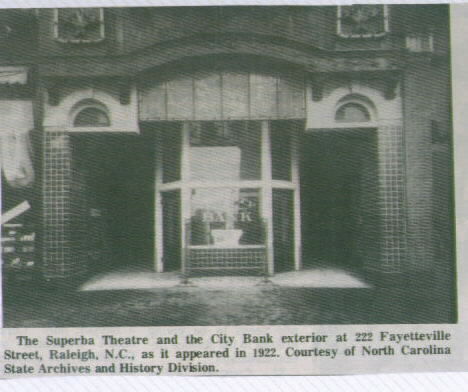 The Superba Theatre was operating by 1922. The building also contained a bank. It was closed on October 14, 1928.

A restaurant named ‘The Big Easy’ now operates from this address.

The unusual cohabitation of a bank and a theater at Raleigh was described in the April 5, 1919, issue of The Moving Picture World:

“Raleigh, N. C., has the distinction of having the only theatre in the United States that has a combination movie house and bank doing business on the same premises. In an interview with R. G. Allen, the proprietor, he said the reason for this is the saving of valuable space. Under the old plans of the theatre ten feet of the most valuable land in North Carolina was practically wasted. Five feet on the north side of the lobby was being used for a women’s room, five feet was also used for janitor’s room. With the change the women’s room was eliminated and used for an entrance.

“The five feet used for the janitor’s room was changed to an exit. The space under the lobby has been changed into a directors' room for the bank, which also contains a vault. The bank is right on the inside of the lobby. The sign on the outside of the theatre reads ‘Allen’s Superba Theatre, and the City Bank.’ This house has a five-piece orchestra; also a pipe organ which cost $5,500. The service used is Fox, Goldwyn, First National and Metro. Business is great. Mr. Allen is a tireless worker, and is a courteous man. He told me hard work is his middle name.”An inventory of historic buildings in Raleigh’s downtown says that the Superba Theatre was converted into the Eckerd Drug Store in 1930. 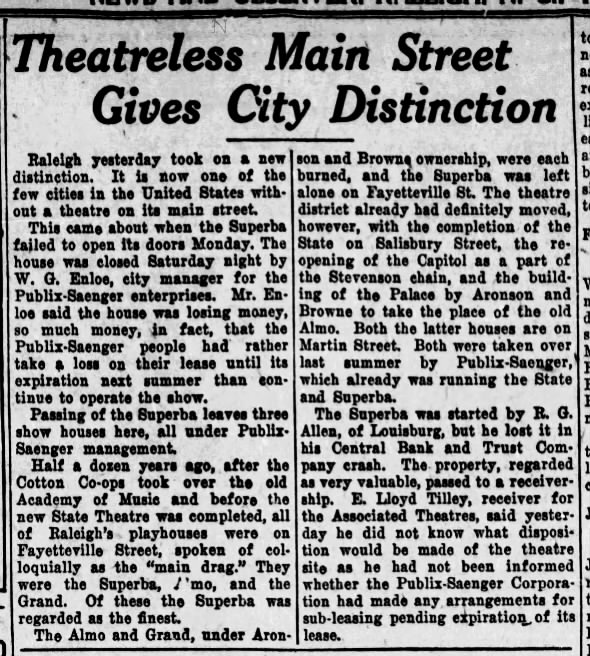