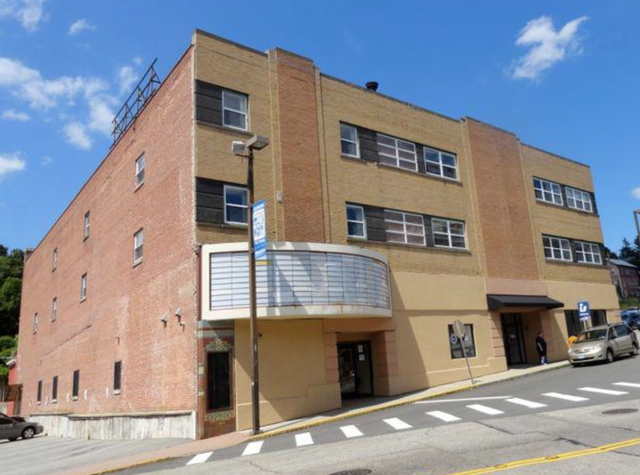 This space, which has been designated as both 276 Main Street and 2 Cliff Street, has been through many names over the years.

As a nightclub it has been the Ballero, the Zeus Bar, and the Marquis Cafe. It is currently known as the Pogo Music Club - but for how long?

This theater was first called the Auditorium and was owned by James B. Shannon. In 1905 it changed to the Strand. A picture is on page 100 of Images of America: Norwich.

Some of the information in comments above is erroneous. The history of Norwich theaters is a bit confusing due to shifting of names, but this house was not the former Strand or the Yale.

There was a Strand Theatre in Norwich that was condemned in 1944. Ed Lord rebuilt it (to plans by architect Charles H. Abramowitz) and reopened it in 1946 as the Lord Theatre. It was not the same as Lord’s Midtown, as a June 8, 1957, Boxoffice Magazine item said that Ed Lord had shuttered the Lord Theatre for the Summer, leaving Norwich with only two operating theaters, Lord’s Midtown and the Stanley Warner Palace. So the Lord Cinema/Midtown/Loew’s Poli was not the same house as the Strand.

The Yale Theatre in Norwich is mentioned in issues of Boxoffice from 1958 to 1961. Ed Lord sold the Lord Theatre in 1958, but the Boxoffice item about it said he would continue to operate the Lord’s Midtown. Then a January 30, 1961, Boxoffice item says that “Isadore and Sam Berkman, owners of the modernistic Midtown Theatre, have resumed personal operation, with the relinquishing by the Markoff Brothers of the lease on the first-run theatre.” The item goes on to say that the Midtown was one of the newest theaters in Connecticut, having been built a decade earlier and originally leased by Loew’s Theatres before being operated by Ed Lord. Lord subleased the house in 1955, according to the November 5 issue of Boxoffice, and renamed it the Midtown.

So, this was not the Yale Theatre, either. An April 3, 1961, Boxoffice item mentioned the closing of the Yale Theatre, saying it had been acquired from the Edward Lord interests some years earlier, so it must have been the former Strand/Lord Theatre. The Yale closed on July 1, 1961, to make way for an urban redevelopment project.

There was a Loew’s Poli theatre operating in Norwich in the early 1940s, as evidenced by several Boxoffice items of the period, but the name was apparently moved to the new house. The construction of this new Poli began in 1948, according to a couple of Boxoffice items from the time, and the July 9, 1949, issue said that Loew’s new Poli in Norwich would open on July 13. I’ve been unable to find out what became of the earlier Loew’s Poli.

There’s also a bit of confusion about the earlier Poli, as in 1942 the former Broadway Theatre was rebuilt, and a few issues of Boxoffice say it reopened as the Loew’s Poli, but then there are many Boxoffice items from the mid-1940s still referring to the Broadway Theatre, and also to the Loew’s Poli, so I don’t know if the names were used interchangeably or if there were two different theaters operated in Norwich by Loew’s at the time.

I’ve also been unable to find when, or if, Ed Lord took this house back, but he took over the former Palace Theatre in 1964, twinning it in 1969. He also opened a twin house in the former location of Barney’s on Main Street in 1976. That might be the Lord Twin Cinemas seen next door to the former Lowe’s Poli/Midtown in the 1980 photo ken mc linked to in the comment immediately above.

Saw this the other day while on a bike trip and sent in pix to Cinema Tour. The cool marquee is still there, but empty. Awesome tilework/mosaic poster holder.

The office on the main floor is the State of CT, Norwich Parole and Community Services office and the corner office is the State of CT Dept of Revenue Services. In the rear around the bldg at the back of the parking lot is the Norwich Vet Center for pets. There’s a sign in the back way up on top of the stagehouse with a stairwell leading fro the lot way up to the stagehouse door. (Streetlevel behind the theater.)

The opening film last year was “Neptune’s Daughter,” also starring Esther Williams, and Boyle invited patrons to sign a giant post card addressed to the star and which was forwarded to her from Norwich.

I’m not sure when the business changed hands, but my mom ran the Midtown Theater in Norwich, and the State Theater in Jewett City during the mid to late seventies. I remember at the time Ed Lord was running the Palace. What a grand place the Midtwon was; 1250 seats, dressing rooms, that huge stage, wall mirrors lining the entry into the lobby. I remember my mom would only charge $.99 for a movie.I have such great memories of watching movies, concerts, and shows there. We sure could use more places like that around today.

Ken Mc’s pic link was the Midtown Theater, at least thats what it was called in the 70s.