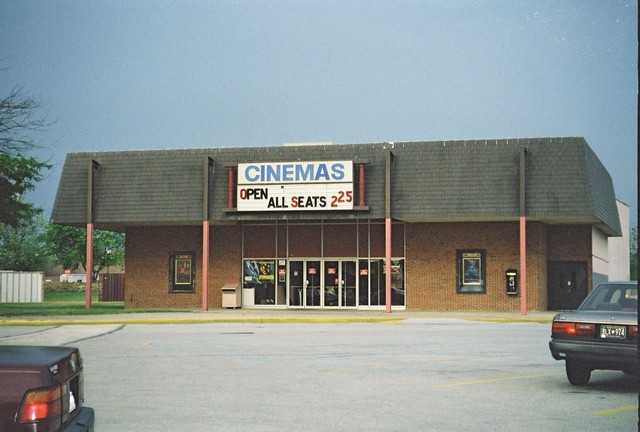 The Exton Cinema opened on February 18, 1970 with Kurt Russell in “The Computor Wore Tennis Shoes”. The theatre was twinned by Budco Theatres in 1977, and closed by AMC Theatres in the late-1990’s, and demolished when the Exton Mall was expanded

The Exton Cinema was NOT a Jerry Lewis theater – the Marchwood Theatre up the road about two miles was. Then when JL went bust, it turned to X-Rated stuff.

My younger brother worked at the Exton Cinema from opening day for about three years, and I got to see a lot of stuff for free. I remember seeing Steve McQueen’s LE MANS there, and a couple of westerns from back then, and a bunch of other stuff. Basically, if it came out between 1970 and 1974 and would have interested a 17-21 year old, I saw it… :)

I remember this theater well, reminds me of the days before the big cineplex theaters moved into Chester County. As a ‘Kid of the 90s’ the last movies I remember seeing here before it closed were Disney’s Aladdin (1992) and The Mighty Ducks (1992). I believe my mother actually took me to see Lethal Weapon 3 (1992) in this theater too.

It was knocked down, now a K-mart stands in it’s place. 95 was it’s last year. Check out the photo section to see all the cool movies that played here…

This theatre was definitely opened past 1995. I saw Titanic, Mulan and What Dreams May Come there in 98.

Launched with “The Computer Wore Tennis Shoes” on February 18, 1970

The Exton Cinema shares the same design as the Concord Mall Cinema, Wilmington, DE, and the York Cinema, York, PA, being as all 3 theatres were opened by Budco Quality Theatres.