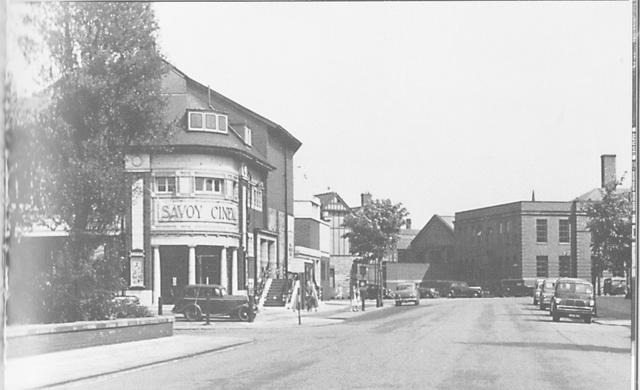 Located in Sale, Cheshire, now part of Greater Manchester, at the corner of Ashfield Road and Tatton Road. Originally on this site was the 700-seat Savoy Cinema-de-Luxe which opened in 1913, and closed to be demolished in 1928.

The New Savoy Cinema was opened on 1st August 1929 with Norma Shearer in “Trelawney of the Wells” and Charlie Chaplin in “The Circus”. Seating was provided in stalls and circle levels. The auditorium decorated in a Wedgewood style. There was a small cafe for the convenience of patrons.

It was re-named Savoy Cinema from 1st November 1975, when an independent operator took over, and operated using the circle seating area only. The Savoy Cinema was closed on 26th February 1977. The building then lay unused until it was demolished in 1985. A block of flats has been built on the site.

Some pictures of the Savoy:

I knew the Savoy well. In it’s later days it was managed by one Harry Nadler, who was a great lover of SF and fantasy films (he produced a magazine – L'Incroyable Cinema)and worked on the Fantasy Fim Festival scene. He was a friend of mine. I first met him when he ran a competition at the Savoy to watch Tales from the Crypt alone at midnight. I was a runner up, just in case the winner chickened out, and spent the time in the office chatting with him. He was in charge of the film program at Mancon 5 where we were able to see The Man Who Fell To Earth before it was released. Harry was lovely guy with a real passion for films and the cinema and sadly missed.