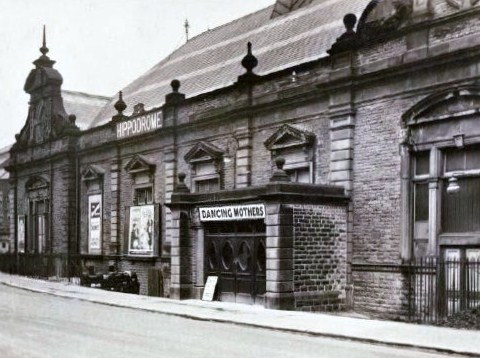 In 1909, it was renamed Hippodrome Theatre, and films were being screened as part of the programme. Eventually it went over to screening films as a full time cinema. The Hippodrome Cinema was closed on 30th January 1937 with Cary Grant in “The Amazing Quest of Ernest Bliss”.

It later was re-named Playhouse and was used for music and drama festivals. It was the home of the Buxton Repertory Company from 1945 to 1979. Since then, it has served as a nightclub, and the upper parts of the auditorium have been hidden by the insertion of a false ceiling. It then became known as the Paxton Suite, as part of the Buxton Opera House, and was a 250-seat multi-function room.

In September 2010 it was remodeled into the Pavilion Arts Centre. The false ceiling has been removed and the balcony brought back into use to create a 360 seat theatre, and with a 93 seat studio theatre on the former stage, which can be partitioned off and soundproofed.

This page from the Buxton Opera House site, shows the interior of what was formerly the Playhouse.

As the Hippodrome, or when opened, I’m not certain, there was Hill ‘straight’ organ installed with 3 manuals, 34 stops and 6 couplers. As to whether this was installed as accompaniment to the silent films, or was already there will need further research. Information from organ-biography.info