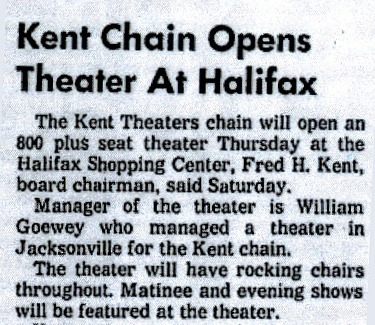 Daytona Beach’s newest first-run suburban movie house opened as the Halifax Rocking Chair Theatre on May 28, 1970. It was constructed in the Halifax Shopping Center by Fred H. Kent opening under the Kent Theatres Inc. banner. Seating was 800 in the large and spacious auditorium. The Halifax was outfitted with the latest projection and sound and had a large wide screen with curtains that opened and closed.

The opening attraction was “Norwood” with Glenn Campbell, Kim Darby, and Joe Namath. This deluxe theatre was a first-run house for most of its 16-year existence featuring all the big attractions.

During a weekend vacation to Daytona Beach in June 1972 a friend and I decided to go see a film on a Saturday evening. Checking the listings I saw “Skyjacked” was playing at a theatre not very far from the hotel. I remember prior to the beginning of the feature they ran an extra long trailer for their next big attraction, “The Godfather.” Since that day in 1972 and until just recently when I researched this theatre I could not remember the name.

Looking through the 10 indoor houses that were currently listed on CT for Daytona Beach did not turn up any familiar looking theatre and/or location. Checking the movie ads in the Daytona Beach Morning Journal solved the mystery. I finally found the ad for “Skyjacked.” The exclusive Daytona Beach showing was playing at the Halifax Rocking Chair Theatre in June 1972.

The final day of operation as a single screener was on September 5, 1977. The final film shown on the big screen was the British thriller “Schizo”. The Halifax reopened as a twin theatre on December 16, 1977 with “Record City” in Twin I and “Looking For Mr. Goodbar” in Twin II.

The Halifax Twins continued operating until sometime between July 15th and August 1st of 1986. During the final few months the theatre had become a dollar house. The last advertisement I could find was dated July 15, 1986 and the films were “The Great Mouse Detective” and “Ferris Bueller’s Day Off”. These may have been the final attractions. By August 1st there were no further advertisements for the Halifax Twins.

Google maps the address of 245 Riverside Drive to a location that shows two high-rise towers called Marina Grande on the Halifax. This area looks very different today from what I remember in 1972, but if this is the correct location then the shopping center and theatre have been razed.

Hopefully someone can verify if this was the site where the Halifax Shopping Center stood.