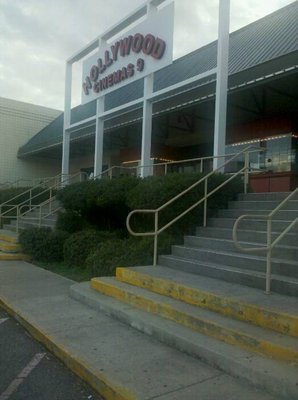 This theater was opened on March 3 1989 by General Cinema as the Esplanade Mall 9, (it was, however, a free-standing theater, not located within the mall). It closed on September 27, 2000. It reopened as the Hollywood Cinemas 9 on May 16, 2002. It sustained some damage from Hurricane Irene in 2012 and closed briefly, but reopened, only to closed again on June 13, 2013.

From what I saw Saturday Night, it might close well before that.

CSWalczak, how can you suggest that Hollywood 9 would have even a fighting chance against a massive new movie-house a stone’s throw (literally)away? THey are not successful now.

If you really read what I wrote, it should be clear that I agree with you that it probably if not definitely will not survive in its present role as a first-run theater. But the owners might make a go of it as a discount house; only time will tell. This has worked in some other places. But unless they can convert to digital, the theater will almost inevitably close as there will be increasingly no product to show.

Sorry, I hear ya' CS. I guess a dollar show is out of the question.

I opened this theater as Managing Director for GCC in March of 1989. That summer was unimaginably busy, with Batman and Honey, I Shrunk the Kids selling out in two auditoriums each for weeks, along with other A track films. As the largest and most modern theater in New Orleans, we were awarded most of the big titles for the first year. THX Dolby Stereo in #4. One silver screen for 3D in #6. We had an office above the concession stand, from which we could view the lobby and service areas. A huge (for back then) concession stand with six or seven serving stations and fifteen people working during peak periods did phenomenal business, giving us one of the highest “per person” concession sales averages in the GCC chain, at around $1.50. Our team won General Cinema’s “Platinum Award” as the theater rated highest (out of 300+ locations) in a secret shopper program rating customer service and cleanliness during 1989.

The theater was not part of the mall, but sat across the ring-road to the west on a separate property. To build the theater, soil was brought into the swampy site, and the theater was built on numerous pilings. As time went by, subsidence caused the parking lot and sidewalks to sink, while the theater sat solid on the pilings. Metal ramps had to be added as the gap between sidewalk and theater ramps increased. A water main broke, causing flooding in #6, and later an electrical main broke leaving the theater without power until repairs were made. All that in just the first few years. Maintenance bills resulting from the subsidence kept mounting after I left in 1992, from what I later heard. As happens, this theater was eventually outclassed by newer and larger theaters opening in the New Orleans market.

The property and theater are currently listed for sale with an asking price of $2.5 million.

Did anyone buy it? I haven’t been over their since about two months before they closed. (About two and a half years ago).

Still haven’t been over to that area since last summer. Have they done anything with the property?

Slated for demo, to be replaced by apartments. http://www.nola.com/business/index.ssf/2018/01/sale_of_dilapidated_kenner_mov.html