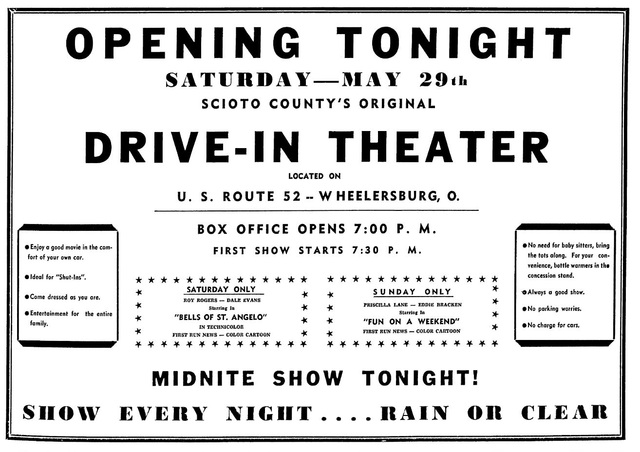 The Drive-In Theatre opened May 29, 1948 featuring the 1947 movie “Bells of St. Angelo” with Roy Rogers, Dale Evans and Trigger. In addition to the movie it played first run news and a color cartoon. It was owned and operated by John L. Carey and Louise C. Carey. The drive-in parking ramp had a car capacity of 500 cars and had playground equipment for the kids located at the base of the screen tower.

On July 23, 1955, the drive-in was renamed the Johnda Lou Drive-In Theatre after John and Louis’s daughter. In 1961, high winds tore down the screen tower and it was replaced with new one that could withstand high winds. On April 23, 1968, an F-5 tornado struck the town of Wheelersburg, Ohio, and almost leveled the town. The new screen tower withstood the storm with only minor damage of a few missing panels on the screen. New projection equipment was installed in 1976 with automatic equipment provided by Christie Electric Corp and Moore Theatre Equipment Corp. of Charleston, WV. Josette Carey, who is John Carey’s daughter, is the projectionist for the drive-in.

The Johnda Lou Drive-In closed down, I believe in 1983. A Lowe’s Home Improvement Warehouse was built in 1995 on the site.

Why the name Johnda Lou?