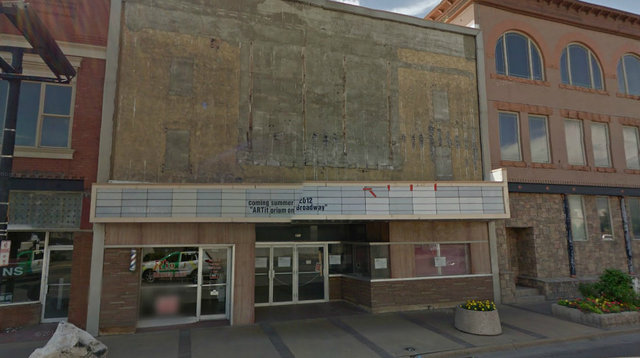 Opened under the name of Broadway Theatre in July 1928, but was soon taken over by Fox West Coast Theatres and renamed the Fox Theatre. The 1934 Golden Jubilee edition of the Post-Register says that when Fox Theatres defaulted on their lease, its manager resumed the lease and reopened it in 1934 under the name of the Rio Theatre. It had 866 seats.

It was later operated by DeMordaunt and Drennan and finally by Carmike Cinemas who closed it in January of 2001. By 2016 it was operated by an arts organisation with the seating capacity reduced to 136.

A few blocks away is the Colonial Theatre and the Centre Twin, the oldest theatre in Idaho Falls.

What a great place, too bad it’s closed.

There were times that the Paramount on “A” street and the Rio on Broadway would compete in being the best theatres in town. In the middle 50’s, for a couple of years, the RIO had the lead in that exhibition race, but eventually, Fox Intermountain’s “Paramount” would reign supreme for the city.

This theatre was purchased by the Idaho Falls Art Council in 2013 and turned into a artistic venue called the ARTitorium. The balcony has been turned into a 136 seat theatre and recording studio. Website: http://www.artitoriumonbroadway.org/