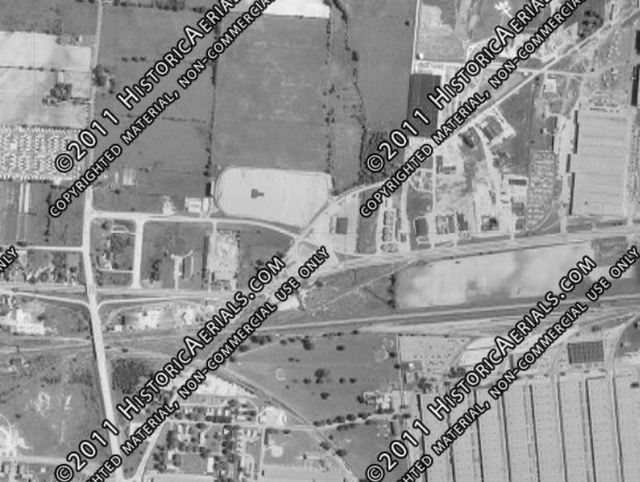 Franklin County’s (Ohio) first ‘in-and-outdoor’ theatre opened on April 27, 1957. Like a traditional drive-in, the Airport Drive-In had a 1,000 car capacity layout. However, attached on both ends of the centrally located projection building, were indoors theatres, each seating 200. In front of each indoor theatre was a wall-size sheet of plate glass. Through this, the audience watched the same movie that everyone in their cars viewed while looking at the outdoor screen. The Airport Drive-In closed after the 1983 season. The land is now used for industrial-commercial purposes.

Opening movies were THE KENTUCKIAN and MAN WITH A GUN. Address of the theatre was 645 N. James Road. In later years, it was outdoor only.

When this theatre was opened, it was called the AIRPORT INDOOR/OUTDOOR. In later years, it was just AIRPORT DRIVE-IN. I don’t know when the indoor part was removed…the theatre was always listed in the Drive-In section of the newspaper listings. I can find no record that it was ever called AIRPARK.

The building that sat underneath the screen still stands. It is now an auto parts store. This may have been one of the indoor theaters. You can see it on Google Streetview.