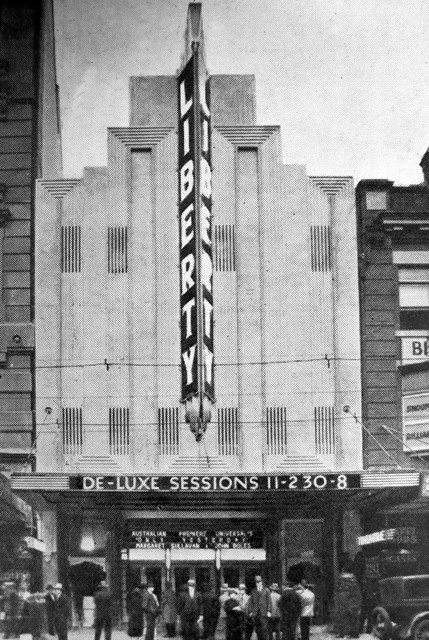 Impresario David N. Martin hired architect Bruce C. Dellit to design a 14 storey apartment tower with a palatial theatre and car park on Castlereagh Street. When that fell through he had Mr. Dellit design a new theatre on the site of the Rialto Theatre (former Grand Theatre) on Pitt Street, the new building to be named the Liberty Theatre.

The Liberty Theatre was opened on 31st March 1934 with Maragaret Sullivan in “Only Yesterday”. The original press release praised the simple Art Deco style, “the magnificent glitter of glass paneling…diffused wall lighting with ceramic dyes gives the theatre a rich yet restrained atmosphere”. Decor featured sculptures and relief wall panels by Raynor Hoff. Seating was provided for 401 in the stalls and 252 in the circle.

Taken over by MGM in July 1937, the Liberty Theatre became MGM’s counterpart to Hoyts Century Theatre with an emphasis on women’s films but in May, 1953, it was chosen for the world premiere of Marlon Brando in “Julius Caesar”.

While it was not ideal for widescreen films it still advertised a “big panoramic screen” and new waterfall curtains helped maximize the screen size. The Liberty Theatre was taken over by Greater Union Theatres in the early-1970’s. It was closed on 30th January 1975, and the 3-screen Greater Union Pitt Centre was built on the site.