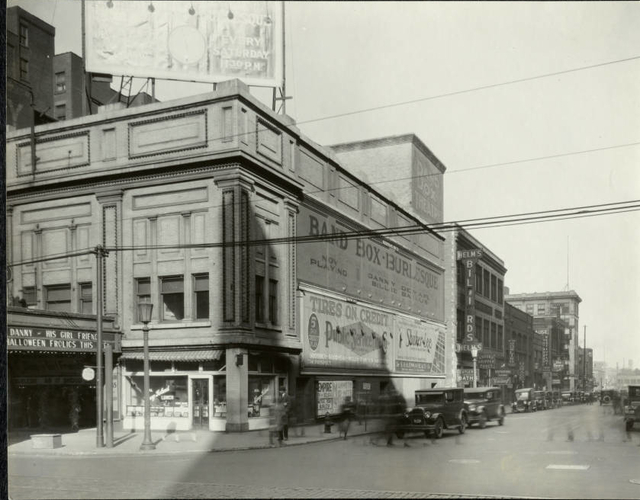 This theatre was located on the northeast corner of E. 9th Street and Chester Avenue. The Priscilla Theatre was opened in 1910. Around 1918 it was renamed Bandbox Theatre which closed in 1927 and it reopened as the Little Theatre of the Movies. By the end of 1927 it became a playhouse, named Little Theatre. On December 25, 1928 it was renamed Empress Theatre, but closed in January 1929.

John Vacha’s Showtime in Cleveland (Google Books preview) says that the Band Box Was originally the Priscilla Theatre, a vaudeville house. In 1927, after closing as the Band Box, it reopened as the Little Theatre of the Movies, operating as Cleveland’s first art house. Its opening attraction was Eisenstein’s Potemkin.

However, by the end of that year the house had dropped the movies and returned to stage productions as simply the Little Theatre. It was one of Cleveland’s more adventurous theaters, presenting premiers of works by Eugene O'Neill and Maxwell Anderson. The house’s time as a legitimate theater only lasted a bit longer than its time as a movie house, and by the end of the 1920s it had been converted into a burlesque house, taking the name Empress Theatre.

As the Band Box, this theater had been the scene of comedian Bob Hope’s earliest stage success. It was here that he refined the act he later took on the road for Gus Sun’s vaudeville circuit. As near as I’ve been able to determine, the Priscilla Theatre was opened (or perhaps taken over) by Gus Sun before 1910, and it was renamed the Band Box sometime after 1918. I’ve been unable to discover how long it operated as the Empress, or what became of it after 1929.

Regarding the link in my previous comment, you have to scroll up a couple of pages in the Google Books preview to reach the section about the Little Theatre of the Movies.

Alan F. Dutka’s Historic Movie Theaters of Downtown Cleveland says that the Priscilla Theatre opened in 1910. Dutka also notes that, as the Empress Theatre, the house remained in operation less than a month after opening on Christmas Day, 1928.