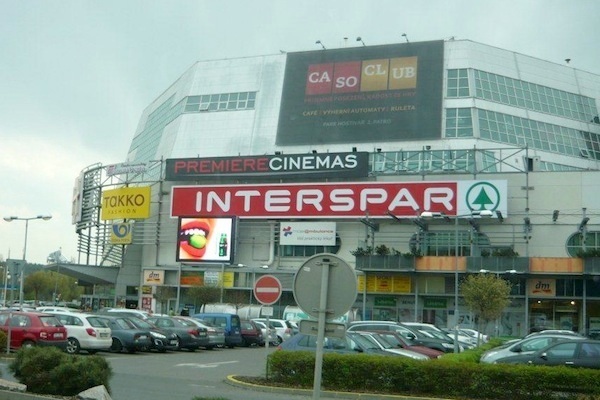 The cinema in the shopping center Park Hostivar in south-eastern Prague is the oldest multiplex in the capital city of Czech Republic, and has a very interesting history.

It opened on 5th October 2000 as an investment of the South African cinema operator Ster Kinekor and used the brand Ster Century Cinemas. It was the second modern multi-screen cinema in Czech Republic after Ster Century Cinemas Olympia in Brno (currently Cinema City Olympia). Actually, there was an older multi-screen cinema in Prague (called Galaxie), but it can’t be compared to the modern multiplexes and has later been abandoned and a modern multiplex was built next to the old building (Cinema City Galaxie).

Only two years after its opening the theater changed its owner (June 2002) and its brand (September 2002). Ster Kinekor sold all its cinemas in Europe to United Cinemas International Central Europe (UCI CE) and this operator rebranded the theater to Palace Cinemas Park Hostivar.

In the beginning the theater had ten screens with more than 2,000 seats, but due to the sharp competition in Prague in the following years, it was forced to close two auditoriums (January 2005). Those halls had a capacity of 283 (screen 9) and 125 seats (screen 10) respectively and were remodeled to a fitness center.

First signs that the theater has economic problems due to its low traffic came with the ongoing cinema digitalization in Czech Republic. While other Palace Cinemas sites become more and more digitalized, Park Hostivar had to wait to April 2010 for its first digital projector. The screen #5 was the 61st digital screen in Czech Cinemas. (Barco DP2K-20C projector, Doremi DCP 2000 cinema server and MasterImage 3-D system.)

The Park Hostivar theater was rebranded again in 2011, when the Israeli company Cinema City International bought the Palace Cinemas chain in Czech Republic, Hungary and Slovakia. In the second half of 2011 the theater became Cinema City Park Hostivar.

The new owner did not invest into this site and in the beginning of 2012 it still had the single one digital projector. On 31st March 2012 Cinema City Park Hostivar closed its doors. Cinema City did not realize, however, that it could anger the owner of the Park Hostivar shopping center, where the theater was located. The Austrian investor company Immofinanz was well aware that the existence of the multiplex has a positive impact on overall traffic of the shopping center.

The Park Hostivar shopping center was among the first modern shopping malls in Prague, but was not built near to a metro station. It has a large grocery store, but lacks prominent fashion tenants. The box office of the theater is placed at the third store of the shopping center. Right behind it are the escalators to the fourth floor with all the auditoriums, the concession stand and also the entrance to the gym that was opened in 2005 in the two abandoned cinema halls. The auditoriums form the architectural interesting roof of the shopping center.

Only some days later after the closure by Cinema City the center communicated that a new operator will reopen the cinema. Immofinanz invested 1.5 million Euro (about 2 million USD) into a new cinema operator with the name Premiere Cinemas. In June 2012 Premiere Cinemas renewed the whole theater and installed new seats, screens, audio and video technologies. The opening ceremony was on 24th June 2012 and first screened movies were “Madagascar 3” and a Czech family movie.

Currently the theater has eight halls and a total capacity of 1,746 seating opportunities. The capacities of the auditoriums changed only modestly. What significantly change are the used technologies.

Premiere Cinemas is hardly trying to be the technology leader in the Czech Republic. This time it does not look like a typical PR-phrase. While other cinemas lose their status as “most modern” when the next theater opens, Premiere Cinemas invests continuously in new technologies.

As the only one in the Czech Republic the multiplex in Park Hostivar has all eight projectors in 4K resolution. Screens #1, #6, #7 and #8 do not have a 3D-system and use Christie CP2230 (#1) and Sony SRX-R320 (#6, #7, #8) projectors. Used servers are Doremi 2K4 and Sony LMT300. The largest auditorium uses a Christie CP4230 projector, the DepthQ 3D-system and the Dolby ATMOS audio system. This 361-seats-hall is the first in post-communist countries of central and Eastern Europe that uses the latest audio-technology developed by Dolby Labs. Besides DepthQ, Premiere Cinemas uses in its Park Hostivar theater also 3D-systems developed by Sony (#3) and MasterImage (#4).

With a price of 169 Czech crowns (less than 9 USD) for 2D ticket the prices are slightly lower than in other Prague theaters. A 3D-ticket without glasses costs 199 CZK (less than 10.50 USD). Cheaper is only the multi-screen cinema Cinema City Galaxie that is not a part of a shopping center and thus not very attractive for customers from other Prague districts. The Dolby ATMOS experience costs 20 CZK extra (about 1 USD).

Premiere Cinemas has two more multi-screen theaters in development. One in the town Teplice – a four screen miniplex and the second one in Liberec – an 8-screen multiplex.

This theater is no way associated with Premiere Cinemas of Texas

I guess the Texas chain did register the brand only in the USA.