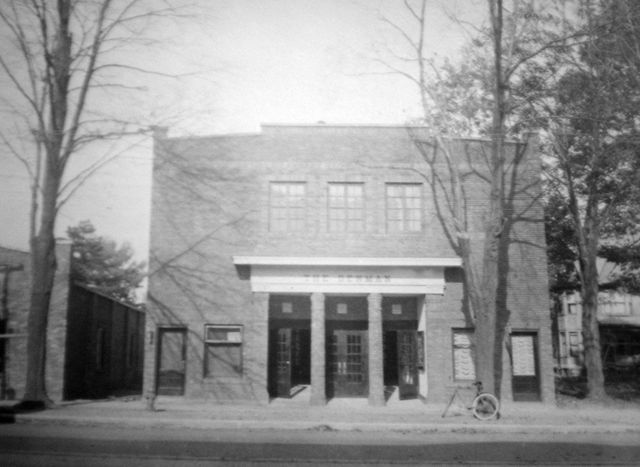 History seems to have passed this obscure theatre by, except that it seems to have been built with a standard off-the-shelf catalogue design. It was opened by 1927, and was still operating in 1950. It was demolished in the 1960’s.

Girard: A Canal Town History, by Geoffrey L. Domowicz, says that the Denman Theatre is located on Main Street, though it doesn’t provide an address. It also uses the present tense in giving the location, but I was unable to spot the building using Google Street View. Maybe somebody else will have better luck.

The theater was apparently named for actor Thompson Denman, who was born in Girard in 1833. He died in 1911, after having spent much of his career playing the lead in a play he commissioned called The Old Homestead.

An ad in a 1927 issue of Publisher’s Weekly lists a book store called the Little Shop located in the Denman Theatre building, so it was open at least that early.

Architect George Eichenlaub penned at least two articles about his “Standard” theater designs for Boxoffice predecessor Motion Picture Times. One in the January 14, 1930, issue describes and illustrates a 500-seat house, which is probably the model the Denman followed. The article begins at this link and continues on this page.

According to this link https://www.facebook.com/pg/eriehistorymemorabilia/photos/?tab=album&album_id=584028344970829 it was demolished in the 1960s.