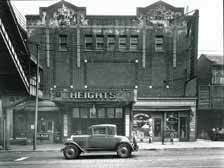 Lost, there is only a small area next to the RKO Bushwick (which is now a little courtyard for the school the Bushwick is now), so if there was something there, it’s long gone It’s a very small trangle shaped block that the RKO was/is on (where mapquest says 1410 is). I can’t picture what is on the next block to the east of there, between Madison and Putnam, but on the east side of Putnam (and Bway) are very old recently refurbished tenaments.

Perhaps this conversation should be moved over to the RKO Bushwick.

Lostmemory & Bway;
Sorry for the delay in responding but suddenly I found myself swamped with work and various projects. Will now explain the Madison.
Operated by B. F. Keiths,The Bushwick was a top vaudeville house in 1910s. There is a large ad in The Weekly Chat for September 26, 1914 listing “the only theatres in Brooklyn owned and operated by the B.F. Keith Co.”. At the very bottom corner is the Madison, Broadway & Madison, “magnificent theatre devoted to photoplays, the best in films and high grade features.” Basically Keith’s had just opened a small movie house in back of their Bushwick. Still not convinced? Still unsure?
Check The Weekly Chat for March 13th, 1915. Not only is there an article on the Madison but a photo as well. The most impressive thing about this two story theatre is the electric signage on front. The Bushwick can be seen looming in the background. The article gives the location of the Madison as “Broadway and Madison Street, adjoining the Bushwick.”
In addition;“ The beautiful little house is devoted to the highest class photoplays and the marvelous clearness and softness of the pictures shown proves the value and success of the gold fibre screen used in this house.”
B.F. Keith’s seems to have sold this theatre by the end of 1915. It still advertises but not as a B.F. Keith’s house. In the summer of 1916 it was given a complete renovation. The Madison is listed as closed in 1924

The Bushwick was built first. The Madison opened in September 1914. After looking at the address and reading your responses, I realized the problem. This appears to be an early typo from whatever publication I got the original information from. It must have been 1410-1412. The newspaper ads only say Broadway and Madison. Don’t have a seating capacity. In my posting, I was just trying to present some information on this movie house. The theatre fits quite snugly in the triangle shown your above photo. If there was anyway I could get the newspaper photo to you, I would do so. You seemed to be annoyed or was the SRO a joke? Once again my apologies if I caused any offence.

Pretty cool. Thanks….I still say we should have moved this conversation over to the RKO Bushwick page a bunch of posts ago, but anyway, I’m glad the confusion was solved….although it must have been a pretty small theater!

Ah, so this is where we were talking about the “second” Madison Theater.

I think the el to the left was torn down by the late 40’s, so this is older than that.

Photo of the Heights Theater possibly from 1929 is located on this webpage.