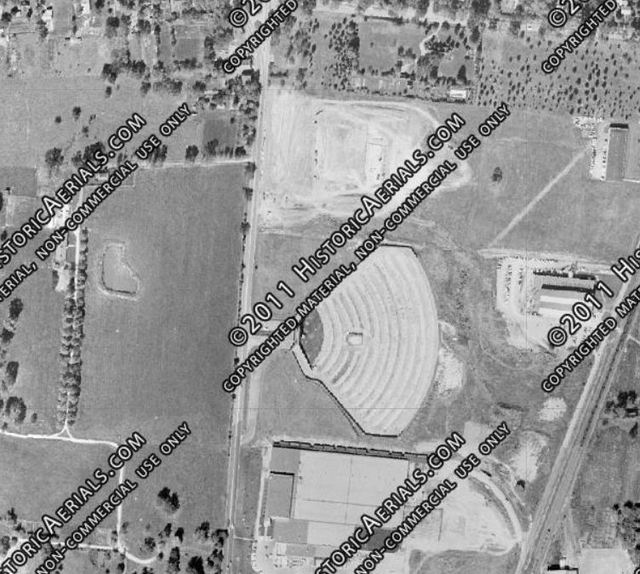 In April 1947, sixty two residents of the Glendale & Woodlawn neighborhoods of Cincinnati, OH. sought to have an injunction of the open-air theatre being built in their neighborhood. The resident’s claimed the theatre would be a nuisance, with traffic congestion and noise. The judge refused to issue the injunction because the drive-in would be using in-a-car speakers instead of blast speakers. Also, the judge said that before he could enjoin operation of the theatre as a nuisance, the theatre must be shown to be a nuisance. How can you say the theatre is a nuisance if it is not built yet and not in operation?

The Woodlawn Drive-In opened on October 3, 1947 screening the 1947 comedy/drama with Maureen O'Hara and John Payne in “Miracle on 34th Street” with color cartoons and first-run news. The new airer was opened by Nat Kaplan dba Theatre Enterprises Inc. Car capacity was 550 cars with in-a-car speakers. Since it was the end of the 1947 season it did not stay open for long and closed on November 16, 1947. The airer relighted on April 9, 1948. In the mid-1950’s, Rubin Shor dba S & S Amusement Co. Cincinnati, OH took over the Woodlawn Drive-In. Rubin Shor died in December 1959. Peter Palazzolo was the Cincinnati restauranteur who held the major interest in S & S. Theatres.

He decided to sell all of the theatres. To make the sale happen, he had to purchase all the outstanding stocks he needed to purchase all the Shor interests in the Eastern Hills Shopping Center. In January 1962, all of S & S Amusement Co. theatres were sold to Marshall H. Fine (dba Associated Theatres from Cleveland, OH) for $3.5 million and Fine formed the Cincinnati Theatre Co. to operate his Cincinnati theatre interests. In 1970, the drive-in was sold to Holiday Amusement from Hamilton, OH and they were the last operator. The Woodlawn Drive-In was closed for good at the end of the 1976 season. The drive-in was demolished and the property was sold, now used as a parking lot for Zenith Logistics.

The first drive-in I ever went to. I remember seeing The Towering Inferno there among others.