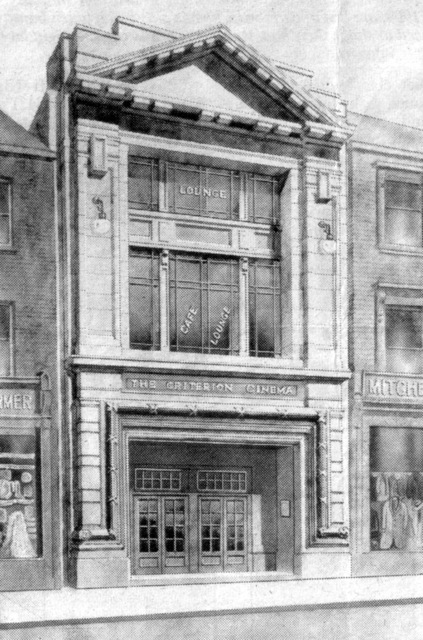 Located in the centre of Dudley, West Midlands. The Criterion was originally a pub. There was a 253-seat hall at the rear which offered music hall entertainment. It became the Criterion Electric Theatre from 27th February 1911.

Architect Joseph Lawden of Birmingham was employed to build a new auditorium at the rear of the existing building, and the Criterion Cinema re-opened on 17th November 1923 with a locally made film “Hearts Aflame”. Now seating 1,200 in stalls and circle levels, it also had a cafe/lounge.

The Criterion Cinema was taken over by the Provincial Cinematograph Theatres(PCT) chain in December 1927, and they were taken over by the Gaumont British Theatres chain in February 1929. It screened its first ‘talkie’ “The Glad Rag Doll” starring Dolores Costello on 11th November 1929, and was equipped with a British Acoustic(BA) sound system.

By the 1950’s, the Rank Organisation had a near monopoly of the cinemas in Dudley, operating the Odeon, Gaumont and Plaza cinemas. The Criterion Cinema was an early closure, shutting its doors on 29th September 1956 with a screening of Kenneth More in “Reach For the Sky”.

The building was sold to electrical goods retailer Broadmead’s, who used the entrance & foyer as a shop from April 1957. It later became a Wigfalls electrical shop. The auditorium was used for storage, and was demolished in around 1980. By 2008, the front of the building has been in use as an amusement arcade.